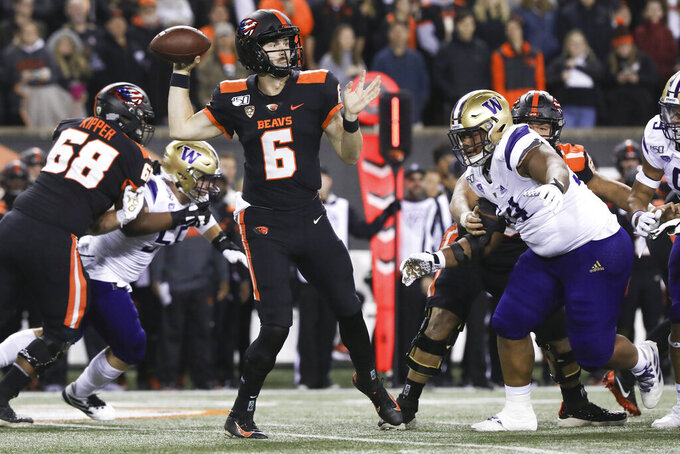 The game between Arizona State and Oregon State might not appear to be a super compelling matchup, but to the Beavers it is vitally important.

The Sun Devils (5-4, 2-4) are essentially a must-win for Oregon State, because after Saturday’s game in Corvallis the team wraps up the season with only two games — against Washington State and Oregon — and both are on the road.

The Beavers have yet to win a conference game at home this season. They’re coming off a 19-7 loss last Friday at home to Washington, where the offense was held in the second half to just eight total yards and no first downs.

But overall, coach Jonathan Smith likes the improvement he sees from a team that won just three games in the last two seasons combined.

“I think our effort is good, I think we're competitive,” he said. “They get we’ve got to play more detailed and execute better to win games that we want to win, and we’ve got opportunity this week to do it.”

The Sun Devils will be motivated because they need just one more win to be in the running for the postseason. With just two conference victories, the possibility of a Pac-12 South title is all but out of reach.

Arizona State fell at home to USC 31-26 last weekend for its third straight loss. The Sun Devils also have just two games left after the visit to Corvallis: They’ll host Oregon and Arizona to wrap up the season.

The Sun Devils have been undone in conference play by early deficits, something coach Herm Edwards pointed to this week.

“I talked to our team a lot about just not self-destructing and getting behind early. When you look at the four games that we’ve lost, the score in the first quarter has been 56-14. ... We’ve gotten down early in some games and we’ve had to fight our way back. Those are the four that we’ve lost so far. It was just the same pattern,” he said.

Jayden Daniels is likely to return at quarterback for the Sun Devils this weekend. He was sidelined for the USC game with a leg injury. Fellow freshman Joey Yellen made his first career start against the Trojans, throwing for 292 yards and four touchdowns, but he’s been dealing with a shoulder strain.

Since this is the last time Oregon State will play at home this season, the Beavers will honor their 16 seniors, some of whom have played for three head coaches and one interim head coach during a turbulent stretch of team history.

“I think the program's headed in the right direction, in an upward trend, and they've contributed huge to that, going through multiple coaches and continuing to battle and overcoming and a lot of adversity. So, I’ve got a ton of respect for these guys,” Smith said.

Oregon State has not lost a fumble this season. No FBS team has ever gone an entire season without losing one.

Benjamin has rushed for 731 yards and seven touchdowns this season. He has 13 100-yard rushing games and needs just one more to move into a tie for fourth on ASU’s career list. He is within 196 yards of moving into a tie for seventh on the school’s career list for rushing yards.

“I think (Benjamin) is about as good as there is in the league,” Smith said. “He’s physical, can run, done some really good things.”