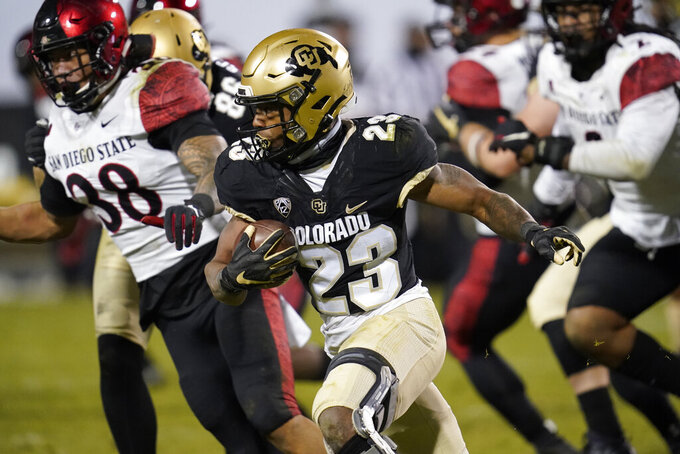 Colorado linebacker Carson Wells prefers to treat football games much like rounding up 600-pound cattle on his family's ranch — one at a time.

That’s why he’s not even thinking about a possible spot in the Pac-12 Conference title game, because a few scenarios would have to transpire in order for No. 21 Colorado (4-0, 3-0 Pac-12) to even have that chance.

Then, it moves on to this: Needing UCLA (3-2, 3-2) to knock off No. 16 Southern California (4-0, 4-0), which currently owns a tiebreaker over the Buffaloes courtesy of the Trojans having one more victory within the division.

“We’ve got to control what we can control and that's go 1-0 each week. We’ve done that so far and have to do that this week,” said Wells, whose team had its Nov. 28 Pac-12 South showdown at USC canceled due to COVID-19 issues within the Trojans program. “Our goal this season was to win a Pac-12 championship.”

Entering the season, not many outside the program shared that sort of vision. The Buffaloes were picked to finish fifth in the Pac-12 South during the preseason media poll.

But they've climbed into the Top 25 this week for the first time since 2018 behind a new coach, a quarterback who was all set to leave town and a running back who missed last season with a knee injury.

It's been quite a start for coach Karl Dorrell, whose team is bowl eligible for the first time since 2016 despite no spring practice or much of a summer workout plan due to the pandemic.

“I've been very impressed how resilient the team has been,” Dorrell said.

The Buffaloes were scheduled to play at USC in a game that could've gone a long way in determining the South champion. But the contest was canceled on Thanksgiving Day due to virus concerns with the Trojans (Colorado instead picked up — and beat — San Diego State as a replacement). The first tiebreaker in determining a Pac-12 division winner is the head-to-head result, which in this case is negated.

The next one is record in games played within the division. But Colorado had its game against Arizona State canceled due to COVID-19 issues within the Sun Devils program.

Now, the best the Buffs can finish within the division is 3-0, while the Trojans can go 4-0.

“Anything can happen,” Dorrell said.

And that's why their focus remains only on Utah, which is the defending Pac-12 South champ.

“All of that will be for naught if we don’t play well this week,” said Dorrell, who was hired in February after Mel Tucker left for Michigan State. “We know that’s going to be a tough task.”

Colorado started fast in 2018, going 5-0 before losing the final seven to miss out on a bowl game and leading to a coaching change.

It's a feeling Wells knows well.

“I was a part of being 5-0 and we just need to keep playing,” said Wells, who has helped his father raise cattle in Florida. “We can’t get complacent."

One of the surprises this season has been the emergence of tailback Jarek Broussard, who rushed for 301 yards in a win at Arizona over the weekend to earn Pac-12 offensive player of the week honors for a second time this season. By Dorrell’s estimation, Broussard's not even 100% yet. He's wearing a brace to protect a left knee that’s been injured twice, including an injury in September 2019 that sidelined him for the season.

Broussard has gained 733 yards rushing in four games, which is six more than Rashaan Salaam had in his first four games when he won the Heisman in 1994.

“It means a lot to be in that kind of company with that sort of player,” said Broussard, whose 183.3 yards per game ranks second nationally behind Jaret Patterson’s 230-yard average for Buffalo.

Then there’s Sam Noyer, a quarterback converted to safety who was planning to leave town after last season before being recruited back by the new coaching staff to play QB again. He's provided another spark.

Ditto for a revamped defense led by Wells and fellow linebacker/roommate Nate Landman.

“We’re still trying to prove to each other what type of program we are," Dorrell said. "We can control how well we play and we can control if we’re prepared and whether we’re playing with the right mindset. Those are the things I’m continually preaching.”