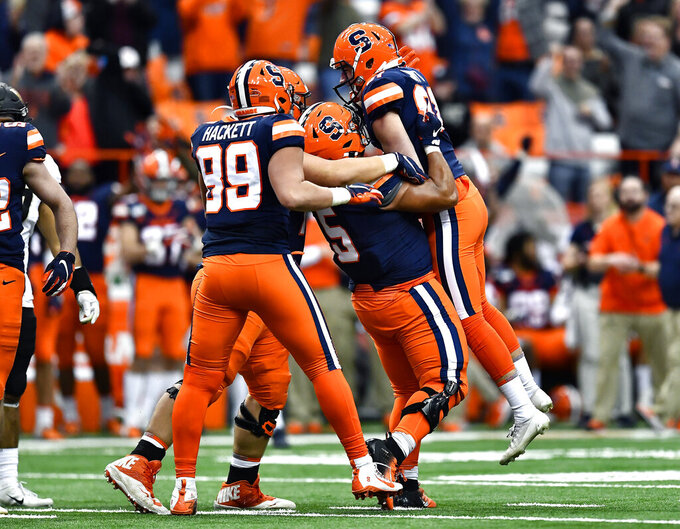 Syracuse kicker Andre Szmyt, right, is lifted into the air by fullback/tight end Chris Elmore (5) after his field goal gave the Orangemen the lead late in the second half of an NCAA college football game against Wake Forest in Syracuse, N.Y., Saturday, Nov. 30, 2019. Syracuse won 39-30 in overtime. (AP Photo/Adrian Kraus)

SYRACUSE, N.Y. (AP) — Trill Williams made sure Clayton Welch’s only start for Syracuse was one he’ll never forget.

The sophomore nickel back stole the ball from Wake Forest receiver Kendall Hinton and returned it 94 yards for a touchdown in overtime, and Syracuse beat Wake Forest 39-30 on Saturday.

“We wanted the seniors to go out with a win,” Williams said. “Next year is going to be a different season.”

Syracuse (5-7, 2-6 Atlantic Coast Conference) was ranked No. 22 in the preseason after posting 10 wins last year and finishing ranked No. 15 in the final AP Top 25. But the Orange lost badly at Maryland in the second game on the schedule and an ensuing four-game skid doomed the season.

“It’s amazing. This was a good football team,” Syracuse coach Dino Babers said. “We’re going to get into a situation where we can turn this thing around, win consistently and not occasionally.”

Welch, a redshirt senior, started at quarterback in place of injured Tommy DeVito, who was hurt during the week in practice, and had a solid day. He finished 21 of 36 for 234 yards passing with two interceptions and threw touchdown passes of 12 yards to Trishton Jackson in the first quarter and a wide-open Luke Benson for 29 early in the second to stake Syracuse to a 17-3 lead.

Welch had the same reaction as his coach.

“Amazing,” said Welch, who was hurt by a hard hit to the sternum but played most of the game. “I wouldn’t have printed it up any other way. It was a great game to go out in. It was amazing to see my teammates fight for me.”

Andre Szymt had given the Orange the lead in extra time with a 40-yard field goal and Williams sealed the victory when he wrestled the ball away from Hinton inside the 5 and raced down the left side untouched as Hinton collapsed in dismay.

“It just came down to one more play,” Wake Forest coach Dave Clawson said. “They made one more play than us. It was a tough way to finish the regular season. We didn’t play well.”

Szmyt’s 49-yard field goal with 44 seconds left in the fourth broke a 27-all tie, but Nick Sciba connected for Wake Forest from 43 yards out with four seconds left to force overtime.

Moe Neal scored on a 13-yard run midway through the fourth quarter to break a 20-all tie after Welch had hit Jackson with a pair of 26-yard completions. Jackson had 10 catches for 111 yards and finished the season with 1,023 receiving yards.

The Demon Deacons (8-4, 4-4) tied it just over four minutes later on Sam Hartman’s scoring pass to Hinton on fourth-and-goal from the 2.

The Wake Forest defense stopped three straight running plays inside the 1 and Syracuse settled for Szmyt’s 20-yard field goal and a 20-13 lead. Donavon Greene’s 75-yard catch-and-run on Wake Forest’s next play from scrimmage knotted the score late in the third.

Greene finished with seven catches for 172 yards and is the first freshman with a 100-yard receiving game for Wake Forest since Todd Dixon in 1990.

Wake Forest starting quarterback Jamie Newman was 6 of 13 for 71 yards and an interception and rushed for 23 yards before getting shaken up in the second quarter. He did not return.

Hartman, who finished 25 of 42 for 350 yards, hit Greene for 27 yards on the first possession of the second half and Cade Carney scored on a 19-yard run after a nice delay at the line as Wake Forest closed to within 17-13.

The first half featured six turnovers, with Wake Forest suffering three interceptions and a lost fumble. Syracuse defensive back Ifeatu Melifonwu had a key pick in the end zone, wrestling Hartman’s throw away from Waydale Jones with just over four minutes left in the second.

“They had their guys ready to go,” Clawson said. “We didn’t take care of the football early. We were fortunate to be in the game, but credit to our kids. We battled back and every time they took the lead we responded.”

Sciba entered the game with an NCAA record 32 straight field goals. He gave the Demon Deacons a 3-0 lead early in the first quarter with a 43-yarder and kicked a season-long 45-yarder as time expired in the second. That made him a perfect 23 of 23 for the season, but his streak of 34 in a row ended when he missed a 48-yard attempt early in the fourth.

Wake Forest: The Demon Deacons have a real threat with Newman, a redshirt junior who has three 400-yard games in his career, if he takes care of the ball, and a capable backup in Hartman.

Syracuse: Defense became an Achilles heel and defensive coordinator Brian Ward was fired after an embarrassing home loss to Boston College in early November. Coach Dino Babers said that will be addressed in the offseason. Wake Forest outgained the Orange 572-441.

Wake Forest, which squandered a chance to play in the Orange Bowl, awaits bowl selection Sunday to find out which Tier 1 game it will play in.

Syracuse’s season is over.