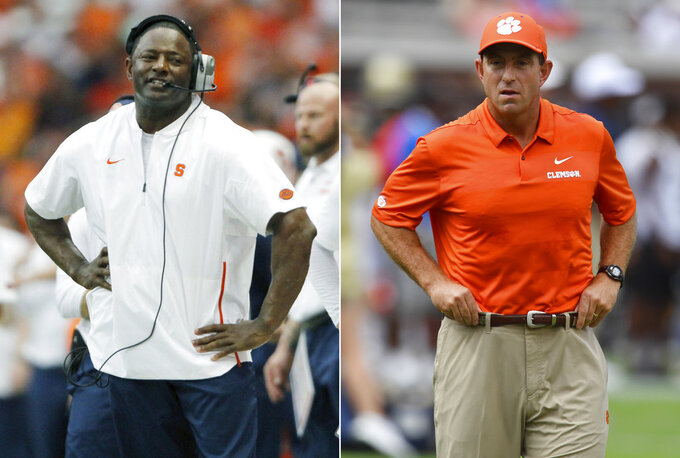 FILE - At left, in a Sept. 15, 2018, file photo, Syracuse head coach Dino Babers reacts late in the fourth quarter of an NCAA college football game against Florida State in Syracuse, N.Y. At right, in a Sept. 22, 2018, file photo, Clemson head coach Dabo Swinney watches teams warm up before the first half of an NCAA college football game against Georgia Tech, in Atlanta. Babers and Swinney share the coach of the year award as the Associated Press All-Atlantic Coast Conference teams and individual awards ewre released Tuesday, Dec. 4, 2018. (AP Photo/File)

Syracuse athletic director John Wildhack is in a good place as winter nears — the men's and women's basketball teams are ranked and so is the resurgent football team, with a bowl game looming.

Most important, the architect of the football turnaround, coach Dino Babers, is set to be around for a while.

The announcement of a contract extension Wednesday — details were not disclosed — concluded a flurry of activity behind the scenes. Wildhack said he started talking about it in early November and went to the chancellor and board of trustees to get their OK.

"Our board was very, very supportive for an extension," Wildhack said Thursday. "He (Babers) was very pleased and enthused when I raised that point.

"It's a long-term extension, and we wanted to emphasize that for recruiting purposes, 2020 and beyond," Wildhack added. "This is about what is in the best interest of the program. I was focused on working really hard on getting this done. Now it is done."

The Orange finished 4-8 in each their first two years under Babers before breaking through with a 9-3 record this season. Syracuse ended the regular season ranked No. 17 after being as high as 12th before a loss to No. 3 Notre Dame a month ago at Yankee Stadium.

Syracuse also finished 6-2 in the Atlantic Coast Conference and runner-up in the Atlantic Division to No. 2 Clemson (the Orange were picked for last in preseason) after a 42-21 victory in the season finale at Boston College. The Orange are headed to the Camping World Bowl, their first bowl game in five years, where they will meet former Big East rival West Virginia, ranked No. 15.

That's heady territory for a team that had had only three winning seasons since 2001, the last time the Orange were ranked.

"I am grateful to have the support, faith and trust of university leaders, the Orange community, our student-athletes and our fans," Babers said in a statement. "I am excited about what the future holds for Syracuse football and look forward to our continued improvement and growth."

"Dino's energy — both on and off the field — is palpable, and his impact on Syracuse football, and in particular on the student-athletes he coaches, has been nothing short of extraordinary," Syracuse chancellor Kent Syverud said in a statement.

Wildhack said the sides reached a verbal agreement 10 minutes before the tipoff of last Saturday's men's basketball game against Georgetown. Babers briefly addressed the Carrier Dome crowd of 24,082 at halftime as the football team was honored and was greeted by a chorus of "Dino! Dino! Dino!"