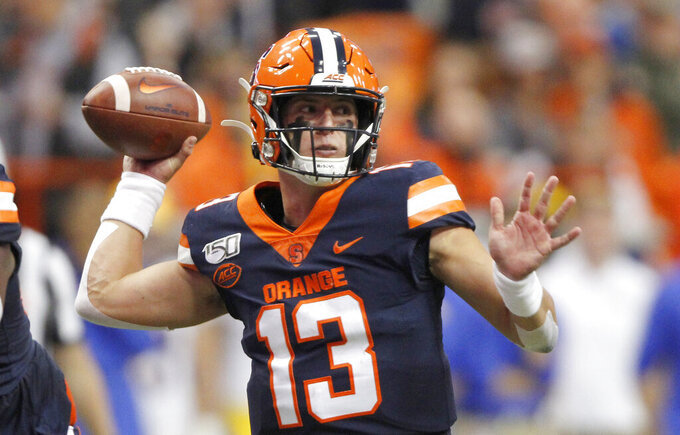 FILE - In this Friday, Oct. 18, 2019, file photo, Syracuse's Tommy DeVito passes the ball during the first quarter of the team's NCAA college football game against Pittsburgh, in Syracuse, N.Y. DeVito is ready to turn the page on the 2019 season. (AP Photo/Nick Lisi, File)

Tommy DeVito’s first season as Syracuse’s starting quarterback didn’t exactly turn out the way he had hoped it would, and he’s more than ready to turn the page.

Ranked No. 22 in the AP preseason poll and picked to challenge defending national champion Clemson in the Atlantic Coast Conference, the Orange finished 5-7 in 2019 and were the last team in the ACC to win a game in the league, finishing 2-6 after a season-ending overtime win at home over Wake Forest on the last day of November.

DeVito put that all into perspective with a post on social media on Monday evening.

“The 2019 season was not what we envisioned as a team; we did not reach our goals, and we hit rock bottom. ... 2020, there will be no hype. There will be no talk about Syracuse Football. There will be no expectations, but for us to lose. The only people that know what we have is us. No more talking ... Beware of the quiet man. New Year, New Team, One Dream ... ” DeVito wrote on Twitter.

Dual-threat quarterback Eric Dungey had led the Orange to 10 wins and a No. 15 ranking in the final AP Top 25 poll of 2018, his final season. It was the first time the Orange had reached double digits in wins and were ranked at the end of a season since 2001, under Paul Pasqualoni.

Big things were expected with the strong-armed DeVito at the helm. He had shown great promise in leading the Orange to two victories as the backup in Dungey's senior season. A record number of fans purchased season tickets last spring and there was a little bit of a swagger that began to show during summer camp in the form of a video series entitled “La Familia” promoting the team and the family atmosphere coach Dino Babers preaches.

Babers' fourth season got off to a solid start when Syracuse won its opener 24-0 on the road against Liberty in late August. But big plans for exposure unraveled quickly after that.

With Clemson coming north for the Orange's home opener on Sept. 14, it was likely that ESPN would decide to bring its popular “College GameDay” show to the Carrier Dome for the first time for football. Any plans were short-circuited when Syracuse self-destructed in a big way, losing by 43 points at Maryland in Week 2, and the promise of another strong season under Babers quickly disappeared.

With injuries hurting the performance of the offensive line, DeVito, not as mobile as Dungey, became the most sacked quarterback among Power Five schools. Syracuse suffered a four-game losing streak after a 3-2 start and allowed 50 sacks (for 297 lost yards) to rank 128th out of 130 Bowl Subdivision schools, and DeVito suffered injuries that sent him to the sideline more than once.

The Orange defense, expected to be the team's strength, allowed 30.7 points per game to tie for 88th and was ranked 115th in total defense, allowing 464.1 yards per game. That was barely ahead of UConn, which finished 2-10.

In the past two weeks Babers has hired new coordinators on both sides of the ball, but he has yet to sign a quarterback, a high priority with signing season winding down and spring ball looming.