TCU's Demercado gets to wrap up collegiate career at home 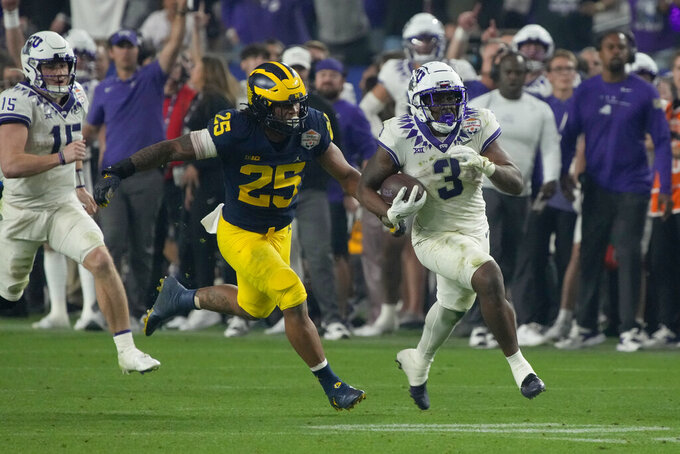 On Monday night, the running back will play his final college game less than five minutes from where he grew up when the No. 3 Horned Frogs (13-1) face No. 1 Georgia (14-0) in the College Football Playoff championship game.

“To be able to have my whole childhood here, leave, go to Texas and be able to finish my college career back here, it’s almost like a script,” Demercado said Saturday during media day.

Even though SoFi Stadium opened in 2020, Demercado said it still feels brand new to him, and he is like a tourist every time he drives by it. The Horned Frogs visited the stadium on Friday after arriving in Southern California.

“It will be a surreal moment to look around (before the game on Monday), which is great, but I have to dial it back and get ready for the game,” Demercado said.

The senior is a significant reason why the Horned Frogs are playing for their first national football championship since 1938.

Demercado rushed for a career-high 150 yards in the CFP semifinal Fiesta Bowl win over Michigan. Most of those yards came after Kendre Miller’s knee injury late in the first half.

If Miller is limited or can not play, Demercado has proven he can pick up the slack. The 5-foot-11, 210-pounder has a career-high 622 rushing yards this season and is averaging 5.8 yards per carry. He also has six rushing scores after having a total of four during his first four seasons at TCU.

Demercado was the first running back to have a 100-yard game against Michigan this season. He had a 1-yard TD run along with a 72-yard carry in the third quarter to set up Max Duggan’s 1-yard sneak.

“I’ve always known what I’m capable of. So to finally be able to put it on display, I think there’s something special for me. It’s just a matter of having that confidence,” Demercado said.

TCU (12-1) will face a Georgia defense that has not allowed a 100-yard rusher or a touchdown run longer than seven yards.

Demercado had only four college offers coming out of Downey High School when he decided to go the junior college route. He had 1,469 scrimmage yards (including 1,026 rushing) and scored 17 touchdowns for Saddleback Community College in Mission Viejo in 2017 when he received an offer from TCU.

“JUCO is not easy. A lot of people don’t make it out, and I was one of the lucky ones,” he said. “I think the biggest thing I learned from it is that there’s light at the end of the tunnel, no matter how hard it may seem.”

Last season, Demercado was TCU’s lone available scholarship running back late in the season and had a 115-yard game against Oklahoma State. With Zach Evans’ transfer to Mississippi, Demercado showed during spring practices that he could be the second running back.

“For him to have the year that he’s had, being the two-headed monster in the backfield with him and Kendre, he’s been a huge piece for us. Obviously, the breakout game last week for him was huge,” offensive coordinator Garrett Riley said.

Demercado’s academic accomplishments are just as noteworthy. He is a three-time, first-team selection to the Academic All-Big 12 team and already has his master’s degree in business analytics after recording a 3.744 grade-point average.

Dykes said Demercado could be successful in whatever path he pursues.

“I do believe he’ll go on to play in the NFL and have a great career. But when he’s done playing football is when he’ll really be successful because he’s just a brilliant guy. And he’s going to be an incredible businessman when he’s done with his football career.

“In 20 years, there’s a good chance I’ll be hitting him up for a job, saying don’t forget about me.”

Demercado had 20 friends and family members at the Fiesta Bowl, but tickets to Monday night’s game have been harder to secure. Demercado’s mother, older brother, and three friends will be at the game.

No matter what happens, Demercado is trying to take in everything about his final college game.

“I never regret any of my choices,” he said. “Going on this journey, learning so many life lessons, and just being able to be at this moment is a great opportunity.”