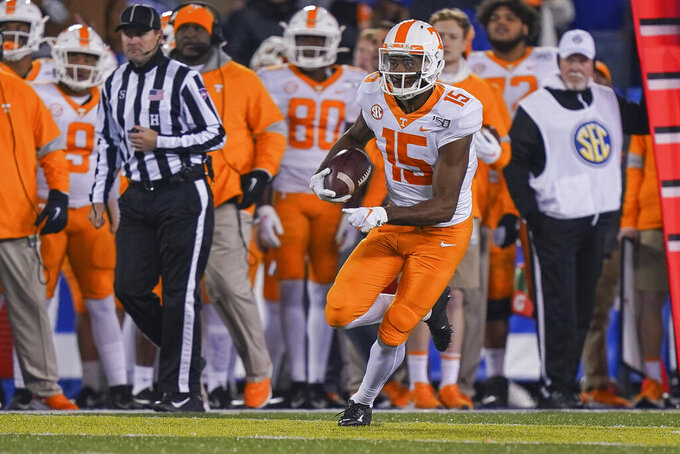 The Volunteers hope the similarities end there.

The Vols also split their first 10 games last year but ended the season with lopsided losses to Missouri and Vanderbilt.

“Last year’s team has had really no impact on this year’s team,” Tennessee coach Jeremy Pruitt said. “This is a totally new team. I do think that the people that were on this team can learn lessons from last year and can draw upon experiences.”

Freshman linebacker Henry To’o To’o says Pruitt told the team after its 17-13 victory at Kentucky last week about the importance of finishing and not looking ahead.

Players have used the term “staying where your feet are” as a reminder to focus on the present.

“That’s what we talk about a lot, not starting to overthink things or think about the future - bowl games,” wide receiver Jauan Jennings said. “You’ve just got to be where your feet are at.”

Jennings then went into more detail on just what that meant.

“Coach Pruitt preaches about it a lot,” Jennings said. “It sticks with me in my mind. It helps you out with your everyday life. If you start thinking about all the things you need to get done in a day, you’re not going to get it done. You’ve just got to be where your feet are at, handle that job or task and move on to the next one when it’s finished. That’s what we’ve been focusing on.”

Although Tennessee is closing its schedule with the same two opponents it faced at this time last year, the Vols appear to have an easier road this time around.

Missouri’s 50-17 victory at Tennessee last year was part of a four-game winning streak. This year, Missouri has lost three straight and still must host No. 11 Florida (No. 11 College Football Playoff ) before facing Tennessee.

Vanderbilt beat Tennessee 38-13 thanks to a big performance from four-year starting quarterback Kyle Shurmur, who tormented Tennessee throughout his career. This year’s Vanderbilt team has a much less stable quarterback situation.

While those teams are slumping, Tennessee is surging.

Tennessee spent big in the offseason to overhaul its coaching staff, paying new offensive coordinator Jim Chaney $1.5 million this season and new defensive coordinator Derrick Ansley $1 million. Pruitt said during the preseason he believed he had the best staff in the country.

That staff has helped Tennessee find its way after a 1-4 start.

“I think when you go through times like that, it’s easy to blame each other and kind of put the blame on one person,” center Brandon Kennedy said. “(Pruitt) told us to stick together. I think we did that, and I think it’s kind of been evident throughout the season.”

Ansley’s defense has allowed a total of 20 points over its last 10 quarters. Chaney’s offense has found a way to win games with four different starting quarterbacks if you include Jennings, a receiver who took the opening snap out of the Wildcat formation in a 41-21 victory over South Carolina.

After struggling early this year and losing his status as Tennessee’s starting quarterback, Jarrett Guarantano has flourished in a relief role and rallied the Vols from a 13-3 halftime deficit at Kentucky. Pruitt isn’t saying how he will use his quarterbacks the rest of the way as he chooses among Guarantano, Brian Maurer and J.T. Shrout.

“Whoever we send out first is because we feel like that is the best plan that works for us in that game,” Pruitt said. “I don’t know who that will be as we move forward, but the players dictate that, not me. They control who plays. We play the guy that gives us the best opportunity to win football games.”