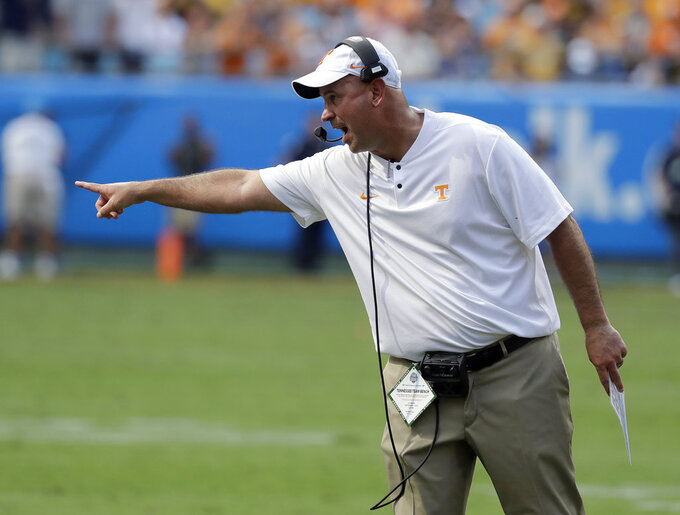 KNOXVILLE, Tenn. (AP) — Tennessee coach Jeremy Pruitt credits East Tennessee State's Randy Sanders for helping his development during their year working together as assistants on Florida State's 2013 national championship team.
Pruitt now has a chance to show him just what he's learned in the five years since. Tennessee (0-1) hosts ETSU (1-0) in a Saturday matchup of first-year head coaches and former colleagues.
"I asked Randy a lot of questions," Pruitt said. "Randy has been doing this for a long time and had a lot of success. When you talked about how to do things structurally or situations come up or things in the game, he helped me grow as a coach. It was my first time, and he really helped me out a lot in different areas."
The 2013 season marked Pruitt's first year as a coordinator after coaching Alabama's defensive backs from 2007-09. He had made the move from the high school ranks to college coaching after the 2006 season.
Sanders said he saw plenty of potential in Pruitt during their year together on Jimbo Fisher's staff.
"I remember Jeremy as a really good guy, good football coach — a football guy," Sanders said. "He loved the game."
Sanders' role as quarterbacks coach meant that he was working with Jameis Winston during his Heisman Trophy-winning season . Pruitt instructed a defense that allowed just 12.1 points per game, the lowest average of any Football Bowl Subdivision team that year .
Fisher, now the coach at Texas A&M , calls Sanders a "big-picture thinker" who came up with great ideas for Florida State's high-powered offense that season. Fisher added that Pruitt had great knowledge of how a secondary and front seven could work together to form a quality defense.
"Both guys were a huge part of the reason we won the national championship," Fisher said.
This game represents a homecoming for Sanders, a former Tennessee quarterback and offensive coordinator. Sanders has worked in Neyland Stadium as an opposing coach before, during his stint as Kentucky's offensive coordinator.
During that 2013 season, Sanders and Pruitt coached one of the most talent-laden rosters of the last decade. Four eventual first-round draft picks and six second-round selections played for Florida State in its BCS championship game victory over Auburn that season.
"That was about as talented and dominant a football team as there's been in a long time," Sanders said.
Things are not as good these days for either Pruitt or Sanders as they begin their head coaching careers.

Tennessee has lost eight of its last nine games , as Pruitt inherited a team that went 4-8 and set a school record for losses last season. Saturday's game will mark the first time ETSU has faced a Football Bowl Subdivision team since relaunching its football program in 2015.
As they start their rebuilding projects, both coaches are getting help from former Florida State colleagues.
Vols safeties coach/special teams coordinator Charles Kelly was Florida State's linebackers coach and special teams coordinator in 2013. ETSU offensive line coach Matt McCutchan and Tennessee quality control analyst Bert Biffani were on Florida State's 2013 support staff.
Tennessee senior associate director of sports medicine Jeronimo Boche was on Florida State's sports medicine staff in 2013. Tennessee athletic department spokesman Zach Stipe was working in Florida State's sports information department that year.
Sanders said that 2013 Florida State staff was a close group that spent an extraordinary amount of time together. Kelly said he even lived with Kelly for about five months.
"It was a special year," Sanders said. "I think six coaches came in at pretty close to the same time. For the most part we were all living together. Either our wives and children weren't there, or in Jeremy's case he was single and didn't have a wife at that time.
"We went to work. After work, we pretty much went to dinner together, went and got something to eat and then kind of hung out together until we started over the next day at work. There weren't a whole lot of distractions."
Some of those former Florida State assistants will get together once again Saturday, though for a few hours they won't be reminiscing about that championship season.
___
More AP college football: https://apnews.com/tag/Collegefootball and https://twitter.com/AP_Top25
___
Follow Steve Megargee at https://twitter.com/stevemegargee