Tennessee has lots to work on after snapping winning streak 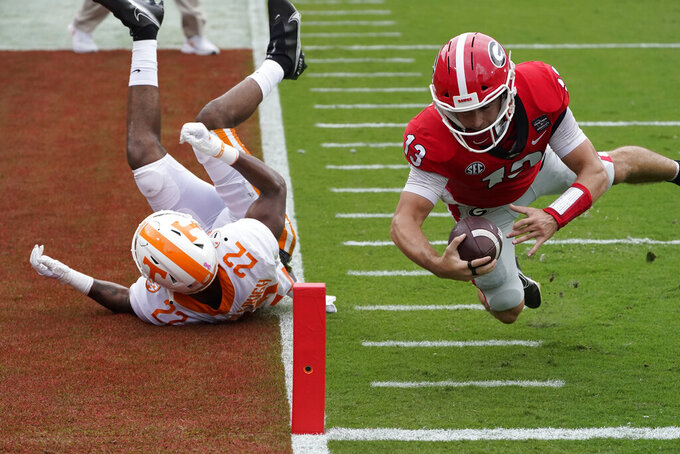 Georgia quarterback Stetson Bennett (13) dives past Tennessee defensive back Jaylen McCollough (22) to score a touchdown in the first half of an NCAA college football game Saturday, Oct. 10, 2020, in Athens, Ga. (AP Photo/John Bazemore)

The 18th-ranked Tennessee Volunteers have plenty of areas to work on after have their eight-game winning streak ended.

The list includes penalties, turnovers, the inability to run the ball or get enough pressure on the opposing quarterback.

Tennessee coach Jeremy Pruitt made clear Monday that Jarrett Guarantano remains the Vols' quarterback even after a 44-21 loss at No. 3 Georgia because the senior gives them the best chance to win.

“Offensively, our struggle Saturday was not because of one independent person," Pruitt said. "It was a team effort. We understand that. It starts with us as coaches to put our guys in a better position to have success.”

The Volunteers lost senior linebacker Deandre Johnson to a targeting penalty midway through the first quarter, a big loss of the Southeastern Conference's sack leader. Pruitt called it a bad decision on Johnson's part taking 2 1/2 steps before hitting the Georgia quarterback.

Pruitt says targeting is a tough rule to enforce with some inconsistencies over the years.

“I think that Deandre should’ve avoided the quarterback, it’s pretty simple,” Pruitt said. "He knows that.”

The Volunteers also had 10 penalties for 84 yards. Pruitt said a penalty on Jaylen McCullough came on a judgmental play as he hit a wide receiver a bit late, and the coach also didn't like being offside on defense and having a pass interference call.

“And then you throw in, on the offensive side, I think we had five false starts," Pruitt said. ”So, just communication, got to do a better job of that, obviously. And had a couple of holding calls, so not very good. We’ve got to eliminate those.”

Tennessee gave up five sacks, which contributed to two lost fumbles and an interception.

“I feel like they moved based on something they had with our quarterback, as far as the timing of the snap,” Pruitt said. "That’s something that we need to fix.”

The Volunteers also struggled to identify the middle linebacker against Georgia despite having a sixth-year center in Brandon Kennedy and a senior quarterback in Guarantano.

“If you want to change the spot, you’ve got to make sure the running back knows,” Pruitt said. "We’ve got to do a better job communicating that. It cost us on probably four plays in that game, that were big plays.”

Tennessee finished with a negative yard rushing on 27 attempts. Eric Gray and Ty Chandler each had eight carries, though Chandler had only 11 yards while Gray gained 25. Pruitt said they didn't execute at a good level at all with poor communication.

“Lots of times we had the wrong MIKE spot, who we’re pushing to on our points, running the football in protection,” Pruitt said. “Got to do a much better job of that. It’s hard to have success if you don’t understand who the MIKE is.”

One plus for Tennessee is having the entire team available for a third week in a row with the exception of some injuries. The Vols also had a scrimmage Sunday where freshman quarterback Harrison Bailey took all 49 snaps after missing practice time before the season due to being quarantined.

The Vols will host Kentucky on Saturday, and Wildcats coach Mark Stoops expects Tennessee to improve.

“There’s not a team that plays a game that doesn’t feel like there’s so many things that we can control to get better,” Stoops said. eek, win or lose."