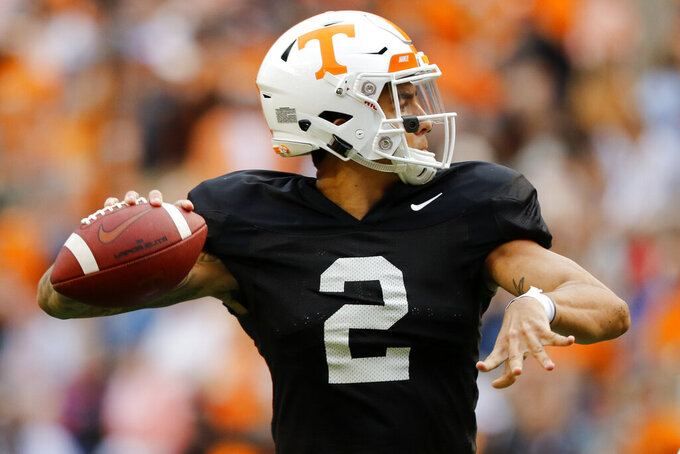 KNOXVILLE, Tenn. (AP) — Tennessee needs a breakthrough season from Jarrett Guarantano as the Volunteers attempt to bounce back from two straight last-place finishes in a division loaded with experienced quarterbacks.

Guarantano took a step forward this spring while showing his comfort level with new offensive coordinator Jim Chaney. The redshirt junior was named the most valuable player of Tennessee's spring game Saturday night as he went 19 of 37 for 198 yards and threw four touchdown passes without an interception.

Guarantano is playing for his fourth offensive coordinator and fourth quarterback coach in as many seasons. He may have a winning combination this time.

Chaney has a knack for getting the best from his quarterbacks. Weinke can offer pointers from his own background as a Heisman Trophy winner and national championship quarterback.

"Jarrett's really smart," Pruitt said Saturday. "He has instincts as a player. He has arm talent. He's got good athletic ability. He's working on the things all players do — consistency. Handling a new coordinator coming in here, that hasn't been a problem. He's done it before, right? Jim's a really good teacher. I think Chris has done a really good job there."

Both Chaney and Weinke like what they've seen from Guarantano, who owns a 6-12 career record as a starter.

"I think Jarrett's going to have a good season," Chaney said earlier this spring. "I think he's playing good football now and he's fun to be around."

Weinke led Florida State to an undefeated season and national title in 1999 and won the Heisman Trophy the following year.

"I'm a firm believer you don't just talk about X's and O's, especially at this position," Weinke said this week. "You talk about the total responsibility of playing quarterback at a major program. Every move you make, every word you say, every step you take is being evaluated by somebody — not only by the coaches on a daily basis but by everybody that sees you. There's a great responsibility when you play this position, even moreso at a place like Tennessee."

Guarantano is accustomed to having new coaches.

All that upheaval helps explain the ups and downs that Guarantano has endured over the course of his career, but teammates notice a difference in him this year.

Guarantano's development is critical because the Vols are trying to work their way up a Southeastern Conference Eastern Division that features plenty of other proven quarterbacks.

Missouri and Vanderbilt lost four-year starters at quarterback but added graduate transfers with plenty of starting experience. Missouri is replacing potential first-round draft pick Drew Lock with Kelly Bryant, who made 18 career starts for Clemson. Riley Neal started 32 games at Ball State before transferring to Vanderbilt to compete with Deuce Wallace for the right to replace Kyle Shurmur.

Tennessee is counting on Guarantano to boost an offense that has ranked last in the SEC in yards per game the last two years. Guarantano says he's ready to emerge into more of a leader.

"As time goes on, I'm definitely developing into a better one," Guarantano said earlier this spring. "I think there's definitely a long ways to go. I definitely can do better."