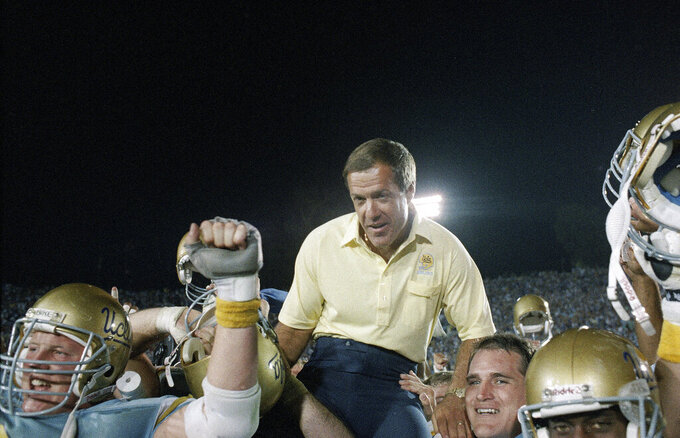 FILE - In this Sept. 10, 1988, file photo, UCLA coach Terry Donahue is carried off the field by his players after UCLA defeated Nebraska, 41-28 at the Rose Bowl in Pasadena, Calif. The victory was Donahue's 100th as Bruin coach. Donahue, the winningest coach in Pac-12 Conference and UCLA football history who later served as general manager of the NFL’s San Francisco 49ers, died Sunday, July 4, 2021. He was 77. (AP Photo/Reed Saxon, File) 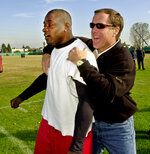 LOS ANGELES (AP) — Terry Donahue, the winningest coach in Pac-12 Conference and UCLA football history who later served as general manager of the NFL’s San Francisco 49ers, has died. He was 77.

The school said he died Sunday at his home in Newport Beach after a two-year fight with cancer.

Donahue has the most wins (98) of any coach in Pac-12 history and also the most wins (151) in UCLA history. He worked as an assistant coaching the Bruins under Pepper Rodgers and then Dick Vermeil from 1971-75, before taking over as head coach at age 31 and serving from 1976-95. His first job out of college was as an assistant to Rodgers at Kansas for one season.

Donahue was the first to appear in a Rose Bowl game as a player, assistant coach and head coach. The Bruins won the New Year's Day game in 1983, ‘84 and ’86 during his coaching tenure. He was the first college coach to earn bowl game victories in seven consecutive seasons, from 1983 to 1989.

“Coach Donahue was truly a great man, and it’s hard to put into words how much he meant to the game,” Manning said. “His contributions are endless, and his legacy will live on through the countless players and assistant coaches he mentored.”

Born in Los Angeles, Terrence Michael Donahue graduated from Notre Dame High in Sherman Oaks before going to UCLA. He joined the football team as a walk-on defensive lineman in 1965. He helped lead the Bruins to their first-ever Rose Bowl win in 1966 with an upset of previously undefeated and top-ranked Michigan State.

He had a 151-74-8 coaching record at UCLA and a 98-51-5 mark in Pac-12 play. The Bruins won or shared five league titles during Donahue's tenure. He coached such future Hall of Famers as Troy Aikman, Kenny Easley and Jonathan Ogden.

“He epitomizes everything you strive to be as a coach and as a human being,” current UCLA football coach Chip Kelly said. “Since the moment I stepped on campus, he’s been an incredible mentor and one of the most authentic, humble and toughest men I’ve ever met. He loved UCLA with all he had, and I can’t express how important his guidance and friendship has been for me.”

Manning credited Donahue for staging the first NFF showcase in California in 2013 that helped high school players gain the attention of college coaches. Manning said the program generates an estimated $6 million in yearly scholarships for players to use as freshmen.

After retiring from coaching, Donahue worked for CBS, Fox and the NFL Network calling games.

He is survived by Andrea, his wife of 52 years; daughters Nicole, Michele and Jennifer; and 10 grandchildren.