Texas defense bracing for another dose of Sooners QB Rattler 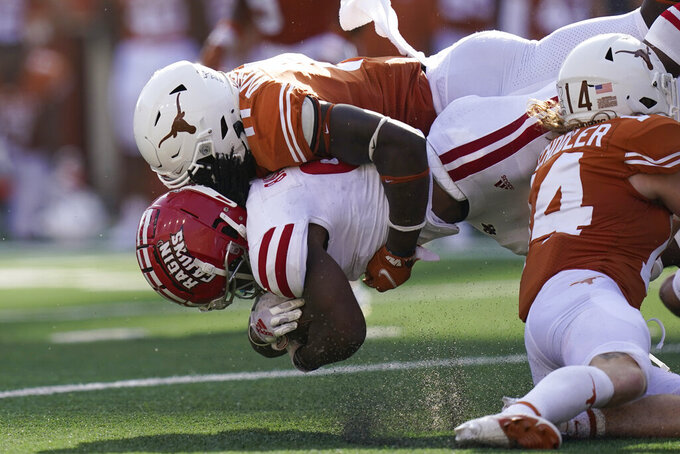 Louisiana-Lafayette running back Emani Bailey (9) is hit by Texas linebacker DeMarvion Overshown (0) during the second half of an NCAA college football game Saturday, Sept. 4, 2021, in Austin, Texas. (AP Photo/Eric Gay)

AUSTIN, Texas (AP) — Texas is ranked again and on a three-game win streak powered by tailback Bijan Robinson and an explosive offense.

Scoring points in bunches has helped prop up a defense has been good enough so far, but has shown just enough cracks to earn some concern heading into Saturday's matchup with No. 6 Oklahoma (5-0, 2-0 Big 12) and quarterback Spencer Rattler.

Hidden in the 70-35 romp over Texas Tech were three long touchdown passes, including two that went over the top of the secondary. Against TCU, Texas (4-1, 2-0) had the game in hand until giving up a 99-yard touchdown drive in the fourth quarter. It was up to Robinson to effectively play defense by grinding out two first downs that let Texas run out the clock against the Horned Frogs.

“I thought our guys played really, really well up until the final seven minutes,” Texas coach Steve Sarkisian said Monday. "I'll be honest with you, I contemplated even taking a timeout trying to regroup a little bit, almost like basketball. You could feel it. (But) I thought we might need that timeout depending on what happened later, so I didn't.

“I think we're getting closer to putting together a four-quarter football game,” Sarkisian said. “We're going to need it. We're playing a team that is not going to stop attacking us.”

Heading up the defense is first-year defensive coordinator Pete Kwiatkowski, who had the same title at Washington until Sarkisian hired him away at $1.7 million per year.

The Longhorns rank 82nd nationally in total defense, allowing nearly 400 yards per game. They are No. 106 in pass efficiency defense, and 79th in allowing third-down conversions.

But Texas is looking like a more cohesive unit than the one that got mashed for more than 300 yards rushing by Arkansas a month ago. Texas still ranks No. 93 against the run but the eye tests shows its not as bad as it was.

“The effort is great. Everybody is getting comfortable as we progress," said linebacker DeMarvion Overshown, the team's leading tackler.

The next challenge is Rattler, who seems to have shaken off some of the early season criticism from Oklahoma fans when the Sooners' offense was struggling to find its rhythm. Rattler passed for three touchdowns and ran for another against the Longhorns last season.

He was ruthlessly efficient last week against Kansas State, completing 22 of 25 passes for 243 yards with two touchdowns and one interception. Seven of Oklahoma's nine drives ended with touchdowns of field goals. The others ended with the interception and when Sooners ran out the final minute of the game.

Oklahoma coach Lincoln Riley called it a patient, controlled performance by his quarterback. And a needed one considering Sooners rarely even had the ball in the first half..

“He stayed patient. The way the first half played out it would have been easy to say 'Aw shoot, here here we go again, we’re only getting this many plays or this many drives or whatever,” Riley said.

Sarkisian noted Rattler seems to be heating up in the Sooners offense.

“When he gets hot, it's like seven-on-seven,” Sarkisian said.

Overshown remembers what that felt like as he chased Rattler through last season's four-overtime thriller won by Oklahoma. Overshown had an interception and was on the field for so many plays on defense and special teams, it hit “triple digits” and left him exhausted he said.

Over the last eight Texas-Oklahoma matchups, seven have been decided by seven points or less.

"It's going to be a four-quarter game,” Overshown said.