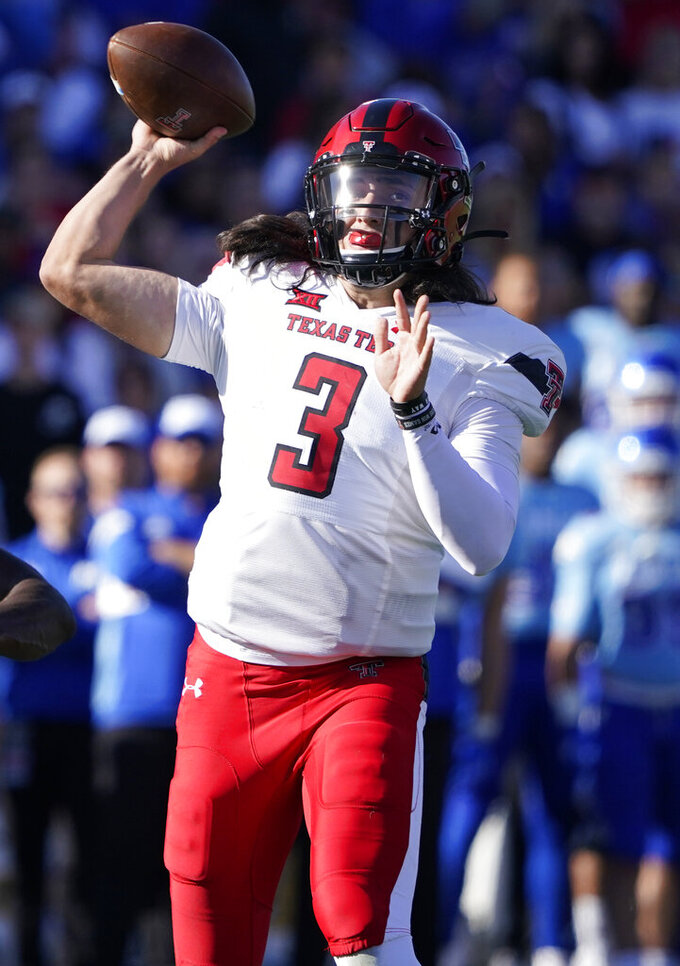 LUBBOCK, Texas (AP) — Texas Tech has won consecutive Big 12 games just once in the past five years, and not during the tenure of third-year coach Matt Wells.

That has been a talking point for the Red Raiders in preparations for Saturday's visit by Kansas State, which has won nine of the past 10 meetings in the series.

Texas Tech (5-2, 2-2 Big 12) has responded to blowout losses to Texas and TCU with victories against West Virginia and Kansas, both on the road. Kliff Kingsbury's final season as coach in 2018 was the last time the Red Raiders won two straight in conference.

Kansas State's Big 12 losing streak is eight going back to the final five games of last season, when the Wildcats started 4-0 in conference with a victory over the Sooners in coach Chris Klieman's second year. The eight-game skid in their longest since joining the Big 12 in 1996.

Kansas State’s Skylar Thompson has five touchdown passes in two games after missing the previous two because of an injury. He set career records for completions (29) and attempts (41) in a 37-31 loss to the Sooners and was solid again in a 33-20 loss to the Cyclones.

While running back Deuce Vaughn had his second career 100-yard receiving game against the Sooners (104 on 10 catches), he’s been held under 100 yards on the ground with no touchdowns in the three Big 12 losses after hitting triple digits in all three non-conference victories and scoring five times. Vaughn did have 99 yards against Iowa State.

“It’s really important for us to sustain the run and have balance and continue to be able to throw the ball because I think Skylar’s playing at a really high level,” Klieman said. “I don’t want to take the ball out of his hands.”

Texas Tech quarterback Henry Colombi made his debut for the Red Raiders off the bench in last year's 31-21 loss to Kansas State. Now he's making his fourth start of the season after Oregon transfer Tyler Shough's shoulder injury in the 70-35 loss to the Longhorns.

“The thing that Henry gives you is a confident veteran,” Wells said. “He’s cool. He’s calm. I think our guys around him have confidence in him. He’s been fairly accurate. He’s not a huge runner, but he can pull the ball down and move the chains.”

Malik Knowles had kickoff returns for touchdowns in consecutive games for Kansas State — 99 yards in a 31-20 loss to No. 8 Oklahoma State and 93 yards late in the fourth quarter to give the Wildcats a last-gasp chance against the Sooners. Knowles is second nationally with a 36-yard average on kickoff returns.

Wells noted that a blocked punt set up a Kansas State touchdown last year, and the Red Raiders missed two short field goals. “It feels like half this press conference we've been talking about Kansas State's special teams already, so that ought to show you the importance of it,” Wells said.

Texas Tech's lone win in the past 10 meetings in the series was in Lubbock in 2015. ... Three of Kansas State's five consecutive victories in the series have been one-score games. ... Red Raiders WR Erik Ezukanma leads the Big 12 at 84.2 yards receiving per game. ... Kansas State DE Felix Anudike-Uzomah is second in the league and tied for 18th nationally with five sacks.