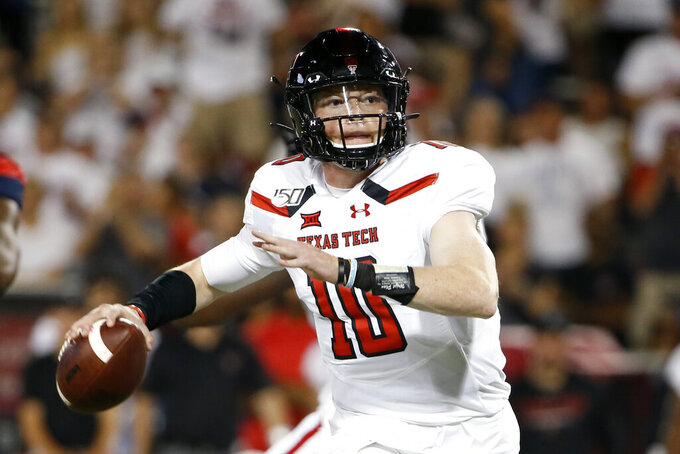 FILE - In this Sept. 14, 2019, file photo, Texas Tech quarterback Alan Bowman looks to pass the ball against Arizona during the second half of an NCAA college football game in Tucson, Ariz. Bowman has been cleared to play after missing six games with a shoulder injury, though the plan now is to redshirt the second-year player. (AP Photo/Ralph Freso, File)

LUBBOCK, Texas (AP) — Texas Tech quarterback Alan Bowman has been cleared to play after missing six games with a shoulder injury but the plan now is to redshirt the second-year player.

Bowman, who got hurt in the third game Sept. 14 at Arizona, could still play in one more game this season for Texas Tech (4-5) and maintain his status as a sophomore player going into next year. Red Raiders coach Matt Wells said Monday he respects and agrees with the decision by Bowman and his parents to not play again this year.

As a true freshman last season, Bowman became Texas Tech's starter in the second game. He threw 2,638 yards with 17 touchdowns in eight games, missing four games over two different stints because of a collapsed lung.