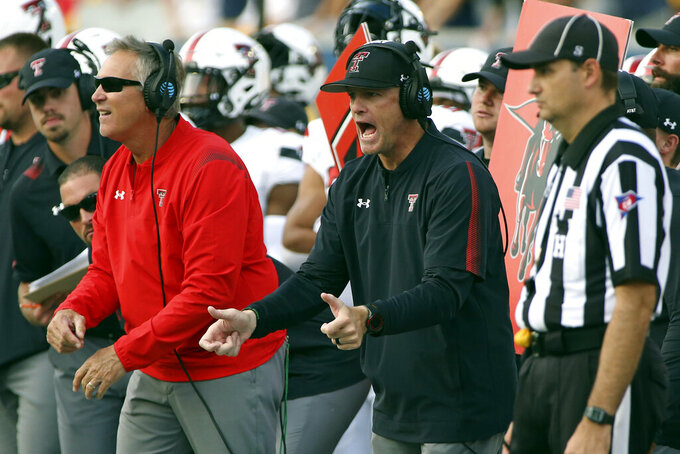 LUBBOCK, Texas (AP) — Texas Tech and TCU were both coming off unsettling losses when they played last weekend. They responded with different results, and now face each other.

“As sad as we were, upset as we were, as embarrassed as we were last week, we feel that good this week,” Texas Tech coach Matt Wells said. “Now now what it needs to do is inspire us to go back and restart all over again.”

TCU (2-2, 0-1), which plays in Lubbock on Saturday night, lost to local rival SMU and then fell 32-27 in its Big 12 opener last week against the same Texas team that a week earlier at home overwhelmed the Red Raiders, 70-35.

"Emotional three games, SMU, Texas and now Texas Tech. They won a good ball game last week. ... Morgantown is a hard place to go play,” TCU coach Gary Patterson said. “It's always tough to play a night game (in Lubbock). Get ready to go, that's what we do.”

After traveling nearly 1,500 miles for the game and taking a 17-0 halftime, the Red Raiders still needed Jonathan Garibay's 32-yard field goal with 18 seconds remaining to win 23-20 at West Virginia. They were without six starters, including top receiver Erik Ezukanma (concussion protocol) and leading rusher Tahj Brooks (lower leg). Quarterback Tyler Shough (broken collarbone) was already out until at least November.

“Very satisfying as a coach to see these guys pull together and be very resilient, show a ton of grit,” Wells said. “Shows you the power of team, the power of we.”

Texas Tech offensive coordinator Sonny Cumbie, the former Red Raiders quarterback who returned last December for his second coaching stint with his alma mater, got emotional this week when discussing his previous seven seasons on Patterson’s staff at TCU.

“Part of my maturation as a coach, a lot of it is really owed to him, a lot of the lessons that I learned from him, so I’m very appreciative of coach Patterson,” said Cumbie, who choked up talking about it. “He took a chance on me and really stood behind me a lot.”

There was one lesson from Patterson that is particularly applicable this week.

“He taught me a lot of things about, for three hours what you have to do opponent-wise to prepare your mindset,” Cumbie said.

TCU sophomore Zach Evans has had three consecutive 100-yard rushing games, and will try to become the first Horned Frog since Lonta Hobbs in 2002 with four in a row. Evans ran for 113 yards on 15 carries in the loss to Texas, while Big 12 rushing leader Bijan Robinson had 35 carries for 216 yards.

“I would never do 35 carries a game like they did with the guy at Texas, if you want to make it through four years,” Patterson said. “You’ve got to be very careful about that. ... He caught four balls so he had 19 touches in the ballgame.”

TCU, playing its first road game of the season, is 44-20 (.688 winning percentage) on the road since 2009. The Frogs have won in their last three trips to Lubbock.

The Red Raiders are 43-16 (.728 winning percentage) in night games at home since 2002. ... This is the fifth year in the renewal of the Battle for Saddle Trophy. That unique trophy was first presented to the winning team from 1961-70, then disappeared before a replica trophy was established in 2017.