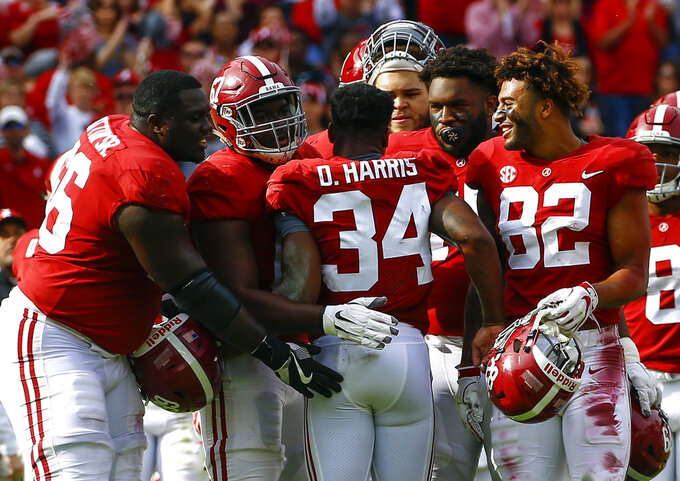 TUSCALOOSA, Ala. (AP) — Perfection is elusive, even for Nick Saban's best teams at Alabama.

The top-ranked Crimson Tide heads into Saturday's regular season finale against rival Auburn still chasing Southeastern Conference and national titles. An unblemished record remains in play, too, though that's been even harder to obtain.

"Coach Saban voices that to us that he's had only one undefeated team around here and he's had how many championships," Tide center Ross Pierschbacher said Monday. "It's possible to lose one and still win a championship but he just wants us to not have that bump in the road, to still be able realize what we have in front of us.

"We don't have to lose a game to kind of wake up. We should always be ready."

Maybe that wakeup call came with a 10-10 halftime score against The Citadel , an FCS team. Alabama (11-0, 7-0 SEC) wound up running away with it, 50-17, but not without uneasy moments that included fumbling the second-half kickoff.

Alabama has already locked down a matchup with No. 5 Georgia in Atlanta this time.

Saban has led the Tide to five national championships over the last nine seasons, but only one perfect record, in 2009. Alabama hasn't needed to be win them all, having twice captured national titles after failing to win the SEC West, including last season.

Winning the national championship helped lessen the sting of losing the West plus state braggin' rights, but not remove it altogether.

"I think the players all know what happened last year," Saban said. "I think they don't feel great about it. They didn't feel good about last year. They've had to live with it for 365 days.

"I don't necessarily think that the revenge factor is the best form of motivation out there, but I think it certainly plays into a guy that's a good competitor who wants to come back and do well if he didn't perform well the last time he played someone."

Alabama doesn't necessarily have to beat both Auburn and Georgia to make the playoffs after dominating virtually every game, though the Tide would like to avoid leaving its fate in doubt again.

Also, for a team that's gone 136-14 over the past 10-plus seasons, going unbeaten would be one way to stand out in the Saban era.

The 2009 team won the first national title under Saban in Tuscaloosa and went 14-0, but had more close calls than this group. That included a 26-21 win over Auburn.

The Tide scored the final 13 points and capped a 15-play drive with Greg McElroy's 4-yard touchdown pass to Roy Upchurch with 1:24 left.

Perfection may not be easy, and neither is winning the Iron Bowl.

"That's always the goal, to win every game," Pierschbacher said. "For me to go out my senior year, I think that would be something pretty special, to go 15-0."

Notes: Tailback Damien Harris has made "really good progress" since sustaining a mild concussion on a 73-yard run in the fourth quarter against The Citadel, Saban said. He's still going through concussion protocol before being cleared to practice. ... Leading tackler Dylan Moses is one of five finalists for the Butkus Award given to the nation's top linebacker.