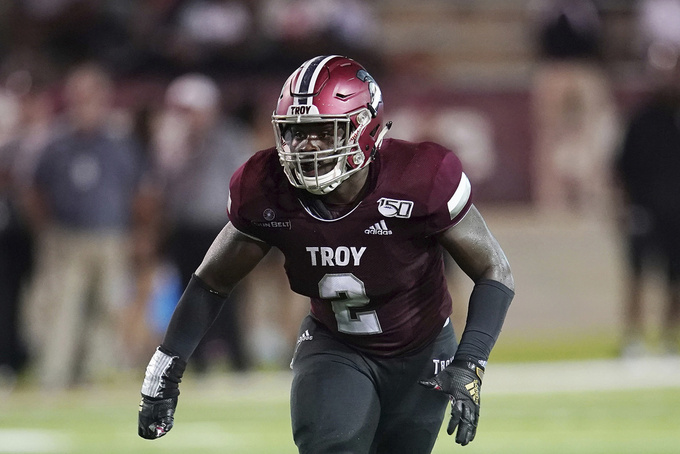 FILE - Troy linebacker Carlton Martial (2) plays during an NCAA college football game in Troy, Ala., Saturday, Sept. 14, 2019. Martial is poised to become the all-time leading tackler in FBS history, likely in the next couple of weeks. (AP Photo/Marvin Gentry, File)

TROY, Ala. (AP) — Carlton Martial doesn’t look the part, and he knows it.

At 5-foot-8 (and a half) and 210 pounds, the Troy linebacker is poised to become the all-time leading tackler in major college football history, likely in the next couple of weeks.

If he did look the part, Martial wouldn’t have had to walk on with the Trojans five years ago and wouldn’t have been overlooked by so many recruiters.

Everyman size aside, he definitely plays the part of a star linebacker.

“In my opinion, he’s the most instinctive natural linebacker in college football,” said Troy coach Jon Sumrall, a former linebackers coach. “And quite honestly he has been for a few years now.”

At the least, Martial might just be the most accomplished player that few outside the state and the Sun Belt Conference know.

The sixth-year player has racked up ridiculous numbers and was a finalist last year for the Burlsworth Trophy, given to the top player who started his career as a walk-on. He needs 20 tackles to break the record of 545 set by Northwestern’s Tim McGarigle from 2002-05. McGarigle did it in 48 games.

Martial, a Burlsworth semifinalist in 2020, has had 55 games thanks to the extra year of eligibility allowed because of the pandemic.

Game No. 56 figures to be another busy one for Martial, going against Army's triple-option Saturday.

Martial looks like any number of gym rats and former high school athletes you might see at a mall, far from the towering specimen one would expect from a dominant college linebacker — like Alabama All-American Will Anderson Jr. a couple hours away.

He’s a football player. Not a football model. The oft-smiling Martial doesn’t seem particularly bothered by the doubters, but knows some remain when fresh opponents note his size.

“I don’t see it in their eyes, but everyone knows that’s on their minds,” Martial said.

It was certainly on the minds of recruiters. No FBS schools offered Martial a scholarship.

Sumrall was Troy’s linebackers coach at the time, and didn't have a scholarship free for the position.

Fast forward: Martial will leave Troy as one of the program’s most notable and decorated players, rivaling former Dallas Cowboys star DeMarcus Ware as a collegian.

“His legend around here is incredible,” said Caleb Ross, Martial’s high school coach and a current Troy staffer. “If you’ve seen him, some things just don’t make any sense."

Martial opted to return for another season at Troy rather than entering the NFL draft. He’s projected to be an undrafted free agent in 2023, but Sumrall thinks he’s capable of playing at that level.

“If people will simply look at the body of work of what kind of player he is and the way he plays the game, I firmly believe he’s good enough,” Sumrall said. “Sometimes people want to draft an athlete instead of a football player. He’s as good of a football player as there is at his position.”

Martial doesn’t hesitate when asked the most oft-cited example of an undersized linebacker making it in the NFL: “Sam Mills,” he said, laughing.

Then Martial pulls a football card of the late Hall of Famer from his wallet, where he’s tucked it away for three years. Mills was a 5-9-ish, undrafted free agent who had a 15-year pro career.

The card was presented to Martial by his former Troy position coach, Andrew Warwick.

Martial may or may not be able to defy the odds again in the NFL, but he’s already done it in a big way.

Ross, his high school coach at McGill-Toolen in Mobile, tried to steer coaches away from face-to-face meetings with Martial, including camps. He wanted them to judge by his film, not his frame.

“All those guys will probably tell you the same, he’s the best football player I’ve coached, ever been around,” Ross said. “Like he was born to play the game of football.”

Martial gets messages on social media from other undersized young players hoping to follow his example. His advice don’t stop and “bet on yourself.” It’s what he did when he walked on at Troy instead of accepting one of his few scholarship offers at Division II schools or FCS programs such as Alabama A&M or Alcorn State.

He’s heard plenty of doubters but falls back on the words of his father, Philbert.

“My father always said, ‘Why not you?’” Martial said. “I take that mind-set with me every day. Why not me?”