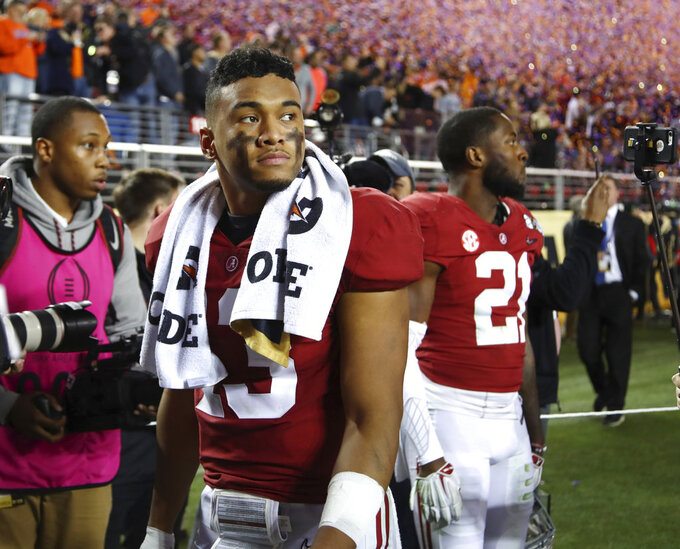 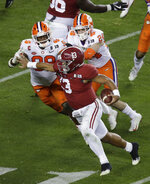 SANTA CLARA, Calif. (AP) — Tua Tagovailoa dropped back on Alabama's third play of the game, threw in between two receivers and had the ball intercepted and returned for a touchdown.

It proved to be that kind of night for the Crimson Tide's uber-talented quarterback, who didn't fare nearly as well as a starter in the College Football Playoff championship game as he did a year ago in relief.

Tagovailoa threw two interceptions, was stopped on a pair of fourth-down runs and struggled mightily in the final three quarters of a 44-16 loss to Clemson on Monday night, the most lopsided loss of coach Nick Saban's storied career at Alabama.

Tagovailoa announced his arrival as a star on this stage a year ago when he came off the bench to throw three TD passes, including the game-winner in overtime to beat Georgia 26-23 for the championship in Atlanta. He followed that up with a Heisman Trophy runner-up campaign, throwing 41 TD passes and only four interceptions for the top-ranked Crimson Tide (14-1) to lead them back to the playoff as a sophomore.

After struggling on an injured ankle before getting pulled in the SEC championship game, Tagovailoa delivered a brilliant performance in the Orange Bowl semifinal game against Oklahoma, throwing for 318 yards and four TDs with only three incompletions.

He looked to be on the way to another big game even after the early interception when he threw a 62-yard touchdown pass to Jerry Jeudy on Alabama's second drive, followed by a 1-yarder to Hale Hentges on the next possession.

But after Alabama drove inside the Clemson 10 late in the first quarter, everything changed for the Tide. A false start by Jedrick Willis Jr. at the 1-yard line helped stall a drive that led to a field goal that gave Alabama a 16-14 lead in the opening minute of the second quarter.

The Tide didn't score again after that, coming up empty on three drives that got inside the Clemson 25.

"We didn't finish drives in the red zone because we could have got right back in the game now," Saban said. "We had the ball down there three times and didn't score a point, didn't score a point. We had a fake field goal, went for it on fourth down twice, had the ball on the 1-yard line. This game could have been a little different if we'd have finished things a little better."

Tagovailoa threw his second interception on the next drive when he launched a deep pass into coverage and took a third-down sack the following drive when he didn't see a cornerback blitz coming. Things then fell apart in the second half with Alabama getting stopped on the fake field goal on the opening drive when holder Mac Jones was stopped for a 2-yard loss on fourth-and-6.

Tagovailoa then was stopped short on two fourth-down runs before spending the rest of a rough night on the sideline.

The 20-year-old Hawaiian finished 22 for 34 for 295 yards, providing a disappointing end to a spectacular year.

"We had a great season, but five words: Good is not good enough," Tagovailoa said. "We didn't finish the way we wanted to finish. We didn't do the things we needed to do to execute and be successful in this game, and that's all it is."