Tucker on a roll as No. 17 Michigan State welcomes WKU 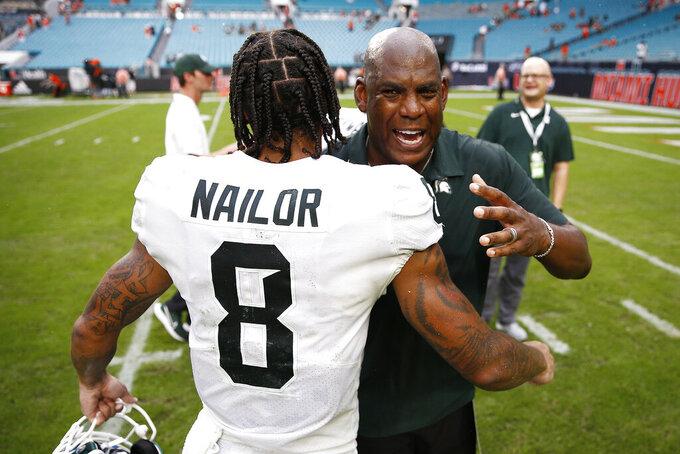 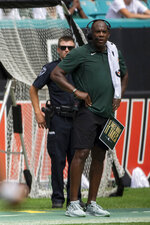 EAST LANSING, Mich. (AP) — Mel Tucker hugged or bumped fists with almost every Michigan State player, assistant coach and member of the team's support staff before exiting the field at Hard Rock Stadium in Miami, where the Spartans had their signature win of the season.

No. 17 Michigan State (4-0) has already doubled its win total from Tucker's debut season entering Saturday night's game against Western Kentucky (1-2) to surpass low expectations that people had outside the program a month ago.

If the Spartans can have success on the back end of the schedule, everyone will believe Michigan State hired the right man last year to restore the level of excellence that retired coach Mark Dantonio reached several years ago. Michigan State hosts No. 14 Michigan (Oct. 30), plays at No. 11 Ohio State (Nov. 20) and faces No. 4 Penn State (Nov. 27) at home over the last five games of the regular season.

Whether Tucker's team finishes a game with the Hilltoppers of Conference USA, its archrival or another highly ranked Big Ten opponent, he shakes hands with the opposing coach then embraces anyone he sees wearing green and white on the field.

“I try to get to the players and everyone — win, lose or draw — to show my gratitude for their effort," Tucker said.

His players notice when Tucker lingers.

“He didn't just do that in Miami, he does it all the time," running back Connor Heyward said. “He's like one of us out there."

The 49-year-old Tucker also has some quirks his players enjoy. He has a “crazy," shoe game, according to Heyward, and has posted pictures of his kicks on Twitter.

And even though college football coaches usually wear slacks, even on steamy Saturdays, Tucker does not hesitate to do his own thing and wear shorts as he did in Miami or a hip hoodie as he did last week at home against Nebraska.

“It was 100-something degrees in Miami and I had a couple pair of shorts in my locker so it made too much sense to me to have shorts on," Tucker said. “And as far as wearing a hoodie, I don't know if anyone thinks I'm cool or not. I'm not trying to be anyone else."

Michigan State’s Kenneth Walker ran for 264 yards in a win at Northwestern and 172 in a victory at Miami, but the Huskers had some success forcing Payton Thorne to pass.

Walker had just 61 yards on 19 carries against a defense stacked to stop him. Thorne could not take advantage down field very often, completing 14 of 23 passes for 183 yards with a touchdown and an interception. Thorne had thrown four touchdown passes in each of the previous two games.

Quarterback Bailey Zappe gives Western Kentucky a shot to pull off an upset and the Hilltoppers have been potent: They scored 66 points combined against Army and Indiana, losing both games by just two points.

Both programs have made the most of the transfer portal. The Spartans have 20 transfers, most notably Walker. Western Kentucky has 28 transfers, including 10 from Power Five schools.

Western Kentucky coach Tyson Helton, who led the team to a bowl in each of his first two seasons, said last week's loss to Indiana provided a lesson before getting tested at Michigan State.

“It would be a great win for our team, and our program, for sure," he added.