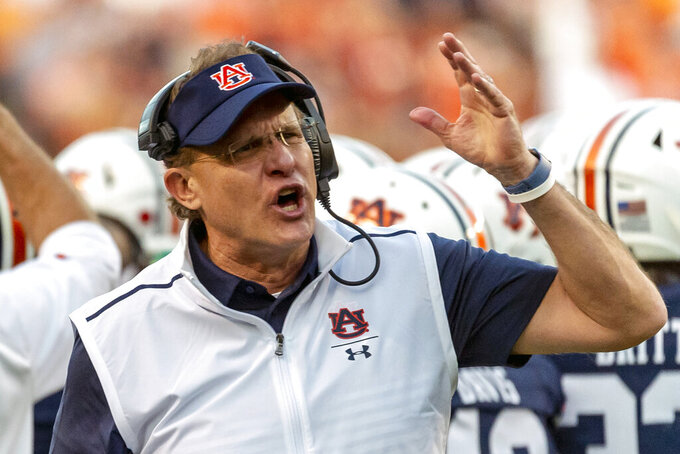 FILE - Auburn head coach Gus Malzahn argues a call during the first half of an NCAA college football game against Alabama in Auburn, Ala., in this Saturday, Nov. 30, 2019, file photo. Central Florida hired Gus Malzahn as its football coach Monday, Feb. 15, 2021, a little more than two months after he was fired by Auburn.(AP Photo/Vasha Hunt, File)

Gus Malzahn had planned take a season off from coaching and maybe do some TV work.

Then the UCF job opened up.

“I truly believe that this is a program of the future in college football,” Malzahn said. “The reason I believe that is the foundation has been built.”

Central Florida hired Malzahn as its coach Monday, a little more than two months after he was fired by Auburn.

Malzahn received a five-year deal with an annual salary of $2.3 million.

The 55-year-old Malzahn was 68-35 in eight years with the Tigers, never having a losing season and going 39-27 in the Southeastern Conference. He led Auburn to the BCS title game in his first season as head coach in 2013, and was offensive coordinator at Auburn in 2010 when Cam Newton powered the Tigers to the national championship.

Malzahn said UCF can reach those lofty heights, too.

“The goal is very simple: Win championships and get into the College Football Playoff,” he said.

Auburn fired Malzahn in December, paying a $21.5 million contract buyout to the coach, after the Tigers went 6-4 in 2020. The buyout had no mitigation clause and is not decreased by Malzahn taking another job.

Mohajir said he called Malzahn even before he was officially announced as UCF's new athletic director to gauge the his interest in becoming the Knights' head coach.

Malzahn said he had drawn some interest from other schools looking for a head coach over the last couple months, but he called it “nothing serious.”

He was content to take a year off after more than three decades in coaching that started in Arkansas high schools.

“This coach has won at every level,” Mohajir said.

Mohajir said even after contacting Malzahn, he went through the process of evaluating other candidates before offering Malzahn the job Sunday night.

UCF has been one of the top teams in the American Athletic Conference since joining the league in 2013. The Knights have won the conference three titles and played in three BCS or New Year's six bowls.

Coach Scott Frost led UCF to an unbeaten season in 2017, capped by a Peach Bowl victory against Auburn and Malzahn. Heupel took over in 2018 and led the Knights to another unbeaten regular season before losing in the Fiesta Bowl to LSU.

Being in a conference outside the Power Five has been a glass ceiling for UCF, but Malzahn doesn't believe it has to stay that way.

“This is one of the top 25 coaching jobs in all of college football,” Malzahn said.

The Knights fell off last year to 6-4, but located in the heart of a talent-rich, football-crazy state and having sunk plenty of money into facilities, UCF appears primed to continue its winning ways.

One of the reasons Malzahn's time at Auburn came to end was a inability to recreate the high-powered offenses the Tigers had the beginning of his tenure.

He promised UCF fans the Knights would continue to light up the scoreboard.

“We'll continue to build on the high-flying offense that we have and our goal to be in the top 10,” Malzahn said.