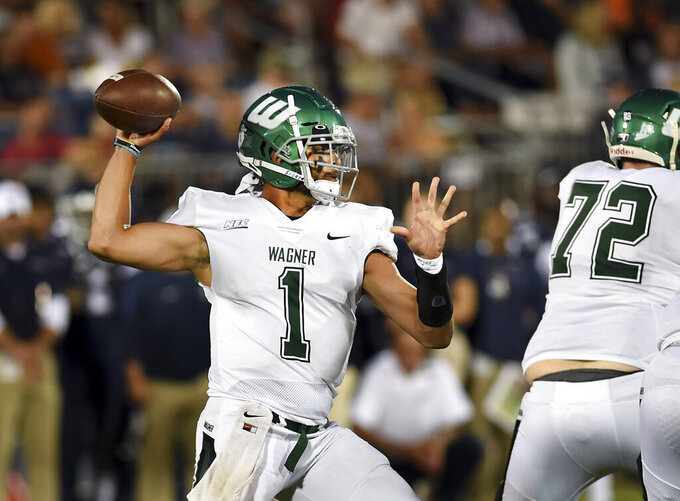 Wagner quarterback Christian Alexander-Stevens (1) sets to pass during the first half of the team's NCAA college football game against Connecticut on Thursday, Aug. 29, 2019, in East Hartford, Conn. (AP Photo/Stephen Dunn) 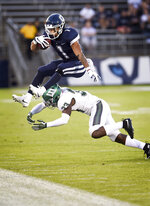 EAST HARTFORD, Conn. (AP) — UConn used a strong running game and a much improved defense to match its win total from last year in its opening game.

The running back tandem of Kevin Mensah and Art Thompkins combined for 235 yards and two touchdowns as the Huskies held off Wagner from the Championship Subdivision 24-21 on Thursday night.

Mensah rushed 36 times for 144 yards and a 4-yard touchdown. Thompkins had 91 yards on 17 carries and a 5-yard score, and UConn had 60 rushing attempts.

"Me and Art have fun," said Mensah. "We have little dance moves, everything. The fact that we can vibe like that is fantastic and it makes me better and I hope it makes him better, too."

Dymitri McKenzie rushed for 115 yards and two touchdowns, including 55-yard score for the Seahawks. He also capped a 92-yard fourth-quarter drive with a 7-yard touchdown to give Wagner its final points.

UConn got the ball back with just over 3 ½ minutes left and was able to run out the clock.

Transfer Mike Beaudry, who led West Florida to the Division II national championship game in 2017, threw for 158 yards and had a 2-yard touchdown run in his UConn debut. He completed 14 of 21 passes, but had an interception that was returned 71-yards for a touchdown by Wagner's Myron Morris.

UConn's only win during last year's 1-11 season also came against an FCS opponent, a 56-49 win over Rhode Island.

"I'm never going to apologize for winning, I don't care if we're supposed to beat somebody 62-10," UConn coach Randy Edsall said. "A win's a win and for our program, we needed to win, regardless how it was."

Wagner: The Seahawks, who play in the Northeast Conference, fall to 0-10 all-time against opponents from the Bowl Subdivision.

UConn: The Huskies allowed 185 yards of offense to Wagner. That was a marked improvement for UConn, which gave up an average of 617 yards and 50.4 points in 2018.

"I feel like we showed today that we've been working and we played to the level that we can," said Lwal Ugak, who had two sacks.

UConn played without its two top receivers. Ardell Brown and Cam Ross were both held out with injuries.

"That makes a difference," Edsall said. "Now you've got to have a game plan that's a little bit different than maybe what you expected."

Mensah had 87 of his rushing yards in the first half and UConn led 10-0 after two quarters, holding an opponent scoreless for a half for the first time since October, 2017, a 20-14 win over Tulsa.

UConn was without defensive lineman Caleb Thomas, who was suspended for four games by the NCAA for academic reasons. Edsall says Thomas was advised to take the wrong class during summer school.

"Here's a young man who got penalized, because he just did what he was told," said Edsall. "You ask these kids to do what they're supposed to do and they do it. And then somebody drops the ball and they get penalized. It's just not right.