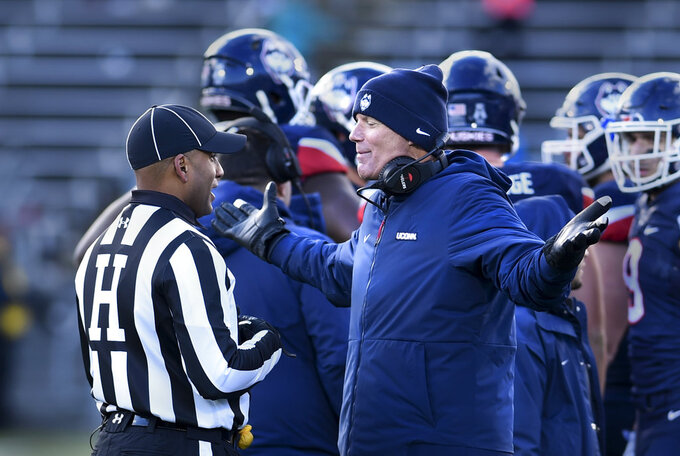 Connecticut head coach Randy Edsall pleads with an official during a time out in the second half of an NCAA college football game against SMU, Saturday, Nov. 10, 2018, in East Hartford, Conn.(AP Photo/Stephen Dunn)

STORRS, Conn. (AP) — UConn has already set one NCAA record for defensive futility. It could reach another if it gives up 56 points to Temple on Saturday.

The Huskies have already clinched the record for yards allowed per game, having allowed 626.6 yards per game through 11 contests and unable to fall below the average of 560.83 allowed by Kansas in 2015.

The numbers are a source of embarrassment and motivation for coach Randy Edsall's team.

"It's definitely embarrassing, but honestly we can't even look at that right now," said defensive back Tyler Coyle. "We've just got to focus on ourselves and do all we can to not be in the record books."

The Huskies have given up 56 or more points three times and allowed at least 49 points in nine games, including their lone win of the season, a 56-49 victory over Rhode Island from the FCS.

UConn also has a chance of allowing the most yards, points, rushing yards, yards per rushing attempt and yards per offensive play in at least three decades, according to the NCAA.

There are reasons for the futility. UConn starts six freshmen on defense and has 11 on its two-deep roster. The Huskies have played 40 freshmen, redshirt freshmen or sophomores this season.

"I can guarantee you there is nobody in the country that has that many snaps by true freshmen on defense," coach Randy Edsall said. "Not even close."

Injuries and a lack of depth have also meant moving some players into different positions. Sophomore linebacker Eddie Hahn and junior Marshe Terry, for example, were recruited to be safeties.

"You can't fix this right now," Edsall said after his team's latest loss, 55-21 loss at East Carolina. "People might not want to hear it, but we're playing with guys who shouldn't even be playing. They aren't big enough, aren't strong enough, aren't fast enough."

UConn defensive coordinator Billy Crocker, who has switched from a three-man to a four-man front this season, said there is a silver lining.

He believes giving so many freshmen playing time this season will pay dividends as soon as next season.

But Edsall said the decision to play a young team wasn't made to give players experience, it was made because they are the best available on the Huskies roster.

"If we didn't do what we did, with all those freshmen, the numbers would have been worse in my opinion," Edsall said. "We did what we had to do to be the best we could be this year and then moving forward to next year."