Uiaglelei returns to Notre Dame as starter for No. 5 Clemson 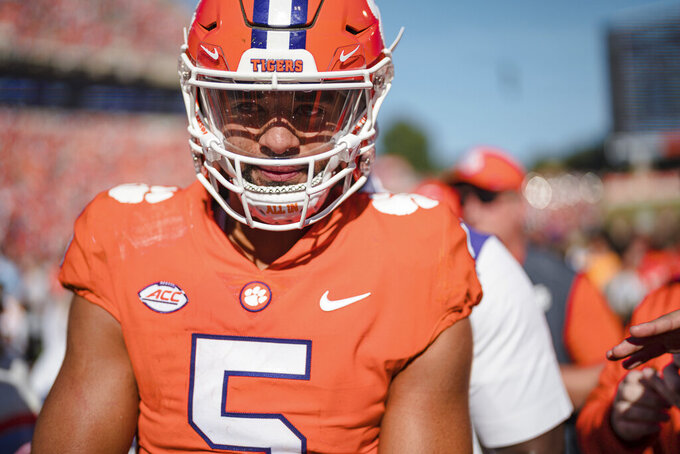 His second trip could help him revive those hopes.

Two weeks after a third-quarter benching, Uiagalelei returns to the scene of a career-defining game when he leads No. 5 Clemson against the Fighting Irish on Saturday night. And the third-year quarterback has learned a few things since 2020.

“The biggest thing is not making the game bigger than it is,” Uiagalelei said. “It’s a big environment. It’s going to be a night game and all the external factors. I think at the end of the day, you’ve just got to go out and play football.”

That's exactly what he did in 2020, his second career start. He replaced Trevor Lawrence (COVID-19) and threw for a career high 439 yards and two touchdowns in a 47-40, double-overtime loss.

While he's played well the past two seasons, Uiagalelei hasn't completely fulfilled the promise everyone witnessed two years ago. Last season, the Tigers lost three times and missed the four-team playoff for the first time since the inaugural CFP season in 2015.

This year, the Tigers (8-0, 6-0 ACC, No. 4 CFP) are on track to make the playoff with Uiagalelei completing 64.1% of his throws with 1,803 yards, 17 TDs and four interceptions. Swinney benched him two weeks ago when three turnovers put Clemson in a 21-10 hole against Syracuse. Freshman Cade Klubnik rallied the Tigers to a victory, causing some to wonder if a change might be made.

Don't bet on it — at least not yet — and a bye week could help Uiagalelei turn things around.

He's not the only quarterback hearing whispers from outside the locker room.

Notre Dame starter Drew Pyne has completed less than 50% of his passes over the past three games and also is coming off a poor game against Syracuse. He had 116 yards passing, one touchdown and one interception in last week's victory over the Orange, relying heavily on a three-man rushing attack.

The Fighting Irish are a 3 1/2-point underdog, according to FanDuel Sportsbook, a smaller spread than when Clemson last visited Notre Dame Stadium. Irish coach Marcus Freeman isn't daunted by the expectations.

“This is what we do, we play in big games like this," Freeman said. "It's not a David vs. Goliath. This is a heavyweight fight. We’ve got a dang good football team.”

Swinney took over as Clemson's coach during the 2008 season and since then, the Tigers have been virtually unbeatable coming off a bye weekend. The Tigers are 16-2 following byes including 6-1 on the road during Swinney's tenure. Clemson has won 10 straight after taking a week off since 2014.

The Irish haven't met their preseason top-10 expectations, but they have fared well against ACC foes. Notre Dame has won 26 consecutive regular-season games in a league that helped them put together a 2020 COVID-19 schedule. Its last regular-season ACC loss was 41-8 against Miami in 2017 though they have lost two postseason games to Clemson — in the 2018 CFP semifinals and the 2020 ACC title game.

Clemson starting safety Tyler Venables sustained cuts and bruises when his moped collided with a car in early October and suffered a concussion that forced him to miss the Boston College game Oct. 8. Last weekend, Venables said he hurt his head when he closed the car door after picking up his Halloween costume, a Starbucks barista outfit. Venables, the son of Oklahoma coach Brent Venables, said this latest incident won’t keep him out of the lineup.

Foskey, Murphy and Clemson defensive tackle Bryan Bresee could be first-round picks in April, and Freeman believes it.

“They’ve got NFL defensive linemen across the board,” Freeman said. “That’s going to be a huge challenge.”

Clemson sophomore receiver Beaux Collins is excited that he’ll finally get to play at Notre Dame Stadium. Collins, from Los Angeles, used to follow the Fighting Irish as they played Southern Cal each year.

Then, as he became a standout prep prospect, Collins was recruited by Notre Dame and attended games there. Did the Irish come close to landing him?

“Not as close as Clemson,” he said with a smile.