Upbeat Huskers confident they're on cusp of first victory 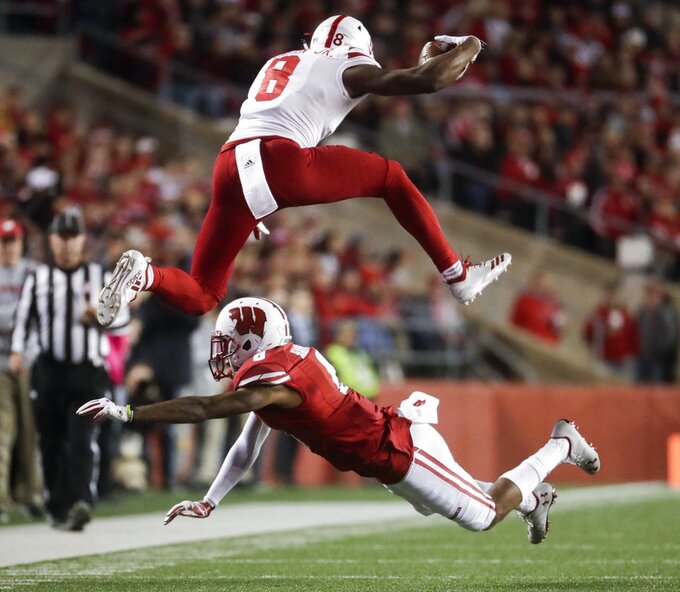 Nebraska's Stanley Morgan Jr. leaps over Wisconsin's Deron Harrell after a catch during the first half of an NCAA college football game Saturday, Oct. 6, 2018, in Madison, Wis. (AP Photo/Morry Gash)

LINCOLN, Neb. (AP) — There's no tangible evidence to back them up, but first-year coach Scott Frost and his players sense a breakthrough is coming for a winless Nebraska team approaching the midway point of the season.

Mind you, this comes from a team with one of the worst defenses in the nation, the team that averages the most penalties and one that just lost by 17 points at Wisconsin.

"Our team definitely has a little bit of new energy to it," quarterback Adrian Martinez said Monday. "I feel like this past week we were really jelling well. It's definitely bound to happen and happen soon, I believe. I feel good. We've got to keep preparing and believing in ourselves regardless, go into each week knowing we can win this game."

The upbeat mood stems from the belief the team has moved beyond tough circumstances and growing pains associated with bringing in a new coaching staff.

The weather-related cancellation of the opener against Akron, right after the opening kickoff, and transfer of backup quarterback Tristan Gebbia two days earlier were emotional setbacks. That left the Huskers to play their first game against a now-ranked Colorado, a 33-28 loss in which Martinez's knee was injured. Last week, receiver Tyjon Lindsey and running back Greg Bell left the team because they were dissatisfied with their roles.

"Something's changed. It really changed after the Purdue game," Frost said. "I saw guys bonding together, having more fun out there, everybody was kind of excited to go to battle. The team wasn't going to put up with any more of the culture killers. We're going to become culture keepers and culture promoters. Sometimes you have to lose a couple guys to get to that point, sometimes you got to maybe bench a couple guys to get to that point. The whole attitude of everybody around here, I feel we turned the corner."

Still, the Huskers rank 105th in total defense, 109th in rushing defense and 121st in scoring defense with a unit missing injured nose tackle Mick Stoltenberg and banged up and short of depth at linebacker. Opponents have converted 41 percent of their third downs (30 of 73), with about one-third of those made in third-and-long situations.

Penalties have hurt the Huskers in every game. They average 10.4 for 97.4 yards, both worst in the nation, and have 13 personal fouls in five games.

"We deserved the ones that were dumb decisions and selfish decisions," Frost said.

If the Huskers can eliminate penalties and make a few stops, the offense has shown it's good enough to play winning football.

JD Spielman caught nine passes for a school-record 209 yards and a touchdown at Wisconsin. Devine Ozigbo rushed for a career-high 170 yards against Purdue.

"We're getting production but we're shooting ourselves in the foot," offensive lineman Matt Farniok said. "We're driving the ball down and then all of a sudden that big play is negated because I had a hold. It's frustrating. No one wants that. We want it to be perfect. We want to win games, plain and simple."