Upstart Arizona tries for another big win vs. Mississippi St 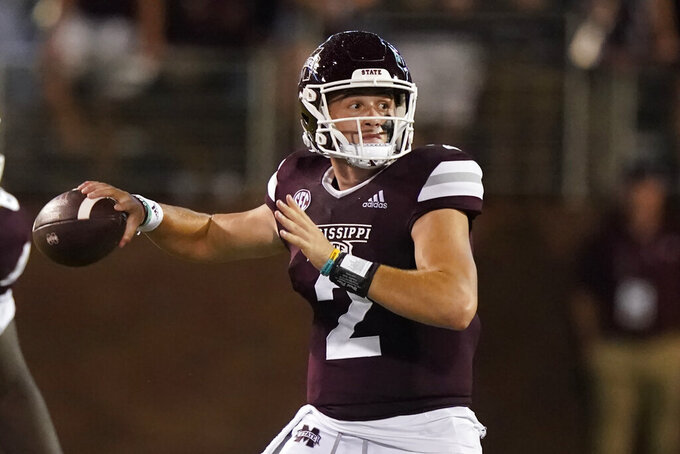 Mississippi State quarterback Will Rogers (2)looks to pass the ball against Memphis during the first half of an NCAA college football game in Starkville, Miss., Saturday, Sept. 3, 2022. (AP Photo/Rogelio V. Solis)

Line: Mississippi State by 11½, according to FanDuel Sportsbook.

It's a fascinating Pac-12/SEC showdown featuring teams that looked impressive Week 1. Mississippi State coach Mike Leach is in his third season and his Air Raid offense was in full effect during a 49-23 win in the season opener against Memphis. Arizona had one of the most surprising wins of the opening week when it went on the road and beat San Diego State 38-20. The win signified considerable progress in coach Jedd Fisch's second season in Tucson.

Mississippi State QB Will Rogers put up monster numbers against Memphis, finishing with 450 yards passing for five touchdowns and one interception. Arizona's defense gave up just 62 passing yards in the win vs. San Diego State, but Leach's offense will bring an entirely different test.

Mississippi State: WR Rara Thomas is on a roll dating back to last season, catching six touchdown passes over his past six games. He finished with a career-high 81 yards receiving on five catches, including 71 yards after the catch.

Arizona: WR Jacob Cowing had a terrific debut for the Wildcats, catching three touchdown passes in the win over San Diego State. The UTEP transfer appears to have formed a quick bond with QB Jayden de Laura, who is also a transfer from Washington State.

The Wildcats are 1-5-1 all-time against opponents from the Southeastern Conference. ... Leach has a 4-2 record against Arizona dating to his time coaching Washington State. ... De Laura threw for 299 yards and four touchdowns against San Diego St. The quarterback is 6-0 in games he throws at least three touchdown passes. ... It's 1,474 miles between Starkville and Tucson. That's the longest road trip for Mississippi State since traveling 1,710 miles to BYU in 2016. ... Mississippi State completed passes to 12 different receivers against Memphis. ... Rogers led the SEC with 364.5 passing yards per game last season.