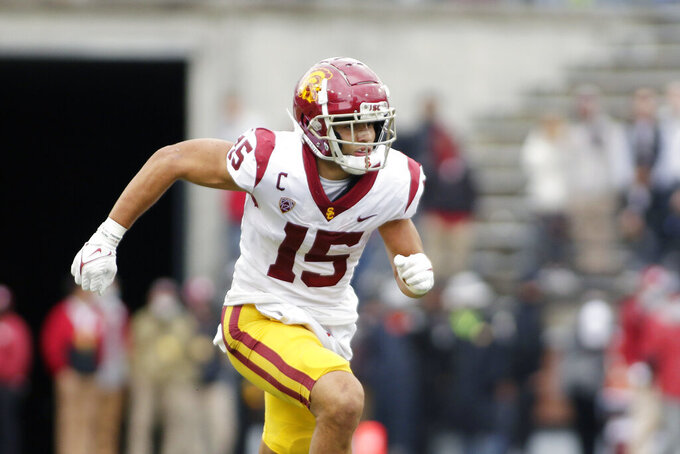 LOS ANGELES (AP) — Southern California receiver Drake London has been taken off the Coliseum field on a cart after injuring his right leg while making his second touchdown catch Saturday.

London had an air cast around his leg, which was hurt while he was tackled in the end zone after catching a 6-yard pass from Jaxson Dart late in the first half. London briefly hid his face in his jersey while being carted to the locker room, but he threw up USC's signature V to the cheering fans.

London has been one of the Football Bowl Subdivision's top receivers all season for the Trojans, who took a 28-7 lead over winless Arizona with London's second TD catch.

London had 79 receptions entering the game for the Trojans, setting an FBS record for the most catches in a team's first seven games. He has caught a pass in 20 consecutive games, and he is on pace to break Marqise Lee's single-season USC records for receptions and yards receiving, 118 and 1,721, both in 2012).

With nine catches for 81 yards and two TDs against Arizona, London has 88 receptions for 1,084 yards and seven touchdowns this season.