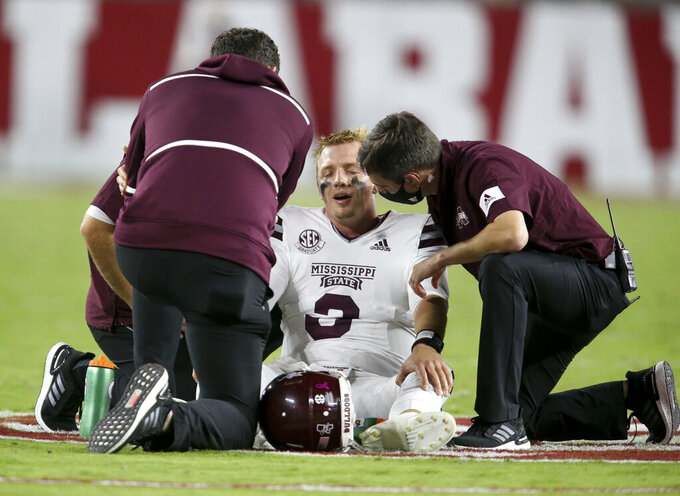 Trainers assist Mississippi State quarterback K.J. Costello (3) after he suffered an injury while during an NCAA college football game against Alabama on Saturday, Oct. 31, 2020, in Tuscaloosa, Ala. (Gary Cosby Jr./The Tuscaloosa News via AP) 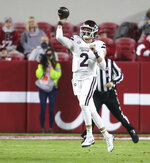 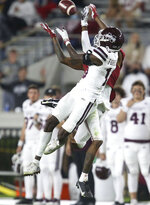 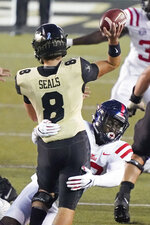 Mississippi State and winless Vanderbilt have enough games remaining to salvage their seasons.

The last-place teams in their respective Southeastern Conference divisions enter Saturday’s meeting in Starkville, Mississippi, each with four-game losing streaks. But a win can spark a turnaround, and neither will have a better opportunity to get a victory than this weekend.

“We understand that games are in front of us,” Vanderbilt coach Derek Mason said of his 0-4 team looking up at the Southeastern Conference East Division. “We want the opportunity.

“But we’ve got to find a way to callous ourselves a little bit, whether it’s the adversity or whether it’s us finding a way to fight through like a tough down or a tough series to get back to where we need to be.”

Injuries have left the Commodores' defense short-handed, which opponents have pounced on to outscore them 136-35 the past three games alone. A COVID-19 outbreak also interrupted their season, forcing a three-week pause before last week’s 54-21 loss to Mississippi in their return to action.

Vandy’s next task is stopping MSU’s Air Raid offense, which Mason saw as Stanford’s defensive coordinator when MSU counterpart Mike Leach previously coached Washington State. Mason has seen little change in the scheme and noted, “He's he’s got weapons all the way around, from the backs to the wideouts.”

The host Bulldogs just want to use them again.

Since upsetting defending national champion LSU 44-34 in the opener, MSU (1-4) has been outscored 114-30 during its skid. That includes last week’s 41-0 shellacking at No. 2 Alabama, the first shutout loss by a Leach-coached team.

Leach expected growing pains with his new program, which this week included the departure of running back Kylin Hill among a recent exodus of players. The coach nonetheless remains upbeat and hopes the Bulldogs start their final five games like they began the season.

“We do have some enthusiasm behind these young guys that get to go out there and play early and they’re excited to be out there," Leach said.

“I think the best is yet to come, but we want that to come as quickly as we can.”

Some other things to watch as Vanderbilt and Mississippi State try to get back on track:

Quarterback remains a toss-up for MSU between K.J. Costello and Will Rogers. Costello took a knee to the helmet and left the Alabama game in the second quarter. Rogers came in and threw two interceptions. Leach was understandably coy about Costello’s status, saying he’s being monitored.

Despite being thrown into the fire as just the third freshman in SEC history to start a season opener and first to do it on the road, Ken Seals keeps showing improvement for Vanderbilt. He is second among SEC freshmen, averaging 174 yards total offense per game. He completed 31 of 40 passes for a career-best 319 yards in the loss to Ole Miss, the best by a Vanderbilt freshman since 2000.

Despite yielding 499 yards to Alabama, Mississippi State remains one of the SEC’s best defenses. The Bulldogs have its best pass defense (212 yards allowed per game), are second in total yardage (336.2) and third against the run (124.2). Their 13 sacks rank fourth.

The Commodores have lost seven straight road games dating back to their last win Oct. 27, 2018, at Arkansas. Going to Starkville likely won’t help because Vanderbilt is just 1-6 there. The lone win came in 1971 when Vandy routed Mississippi State 49-19. This also is Vanderbilt’s first road game since Sept. 26 after a variety of injuries, COVID-19 tests and tracing forced the rescheduling of the Commodores’ road trip to Missouri from Oct. 17 to Dec. 12.