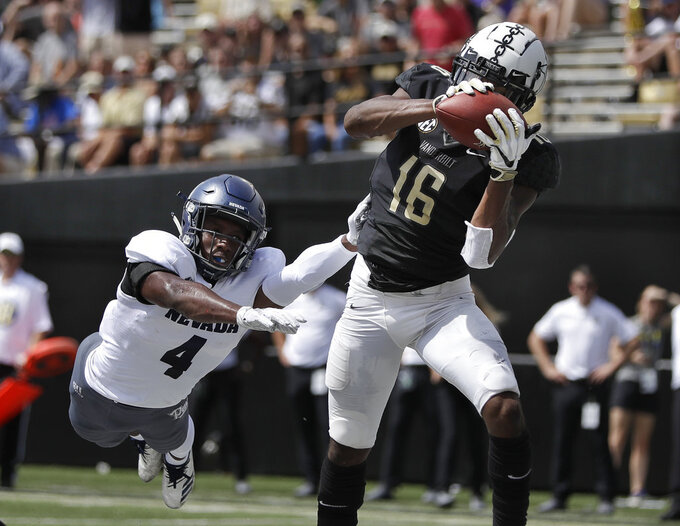 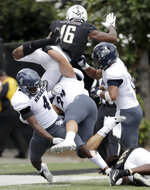 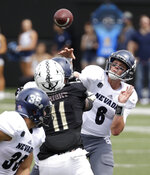 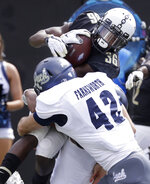 NASHVILLE, Tenn. (AP) — It's inevitable a football coach will claim his team's best football is ahead of them and that no matter the margin, things could be better.

Vanderbilt coach Derek Mason insisted his team was "sloppy" Saturday despite an emphatic 41-10 victory over Nevada. In this case, though, it's hard to argue.

The Commodores (2-0) started the game with two promising drives but left with no points. An eight-play, 64-yard drive ended with a fumble and a calculated risk on fourth down stopped a 71-yard drive on its eighth play.

Mason, confident in his defense's ability to keep things under control, even against a Nevada (1-1) team that posted 72 points against Portland State last week, never changed the game plan: a balanced attack keying around a rotating cast of running backs and senior quarterback Kyle Shurmur making plays down the field when the time is right, but just as often playing it safe, tossing to tight ends out of play-action, a point of emphasis in practice this week.

After building a 17-3 lead behind Kalija Lipscomb's 2-yard touchdown catch and Ke'Shawn Vaughn's 7-yard rushing score, the Commodores looked in control, but a 9-yard Ty Gangi pass to Brendan O'Leary-Orange in the final minute of the first half brought the visiting Wolf Pack within a touchdown.

"We did a solid job (in the first half)," Mason said. "But we have to take the care of the football. ... We did a better job (in the second half), we had more energy and the engine started to run."

Vanderbilt scored on three straight drives to open the second half including a 46-yard dash from the speedy Vaughn for his second score and Lipscomb's second touchdown catch of the day from Shurmur, stretching a one-touchdown lead to a 24-point margin.

"I'm disappointed but I'm not discouraged," Nevada coach Jay Norvell said. "We made too many errors in the critical part of the game to really have a chance to win."

With 3:13 left in the first half and the Vanderbilt offense facing a fourth-and-4, Mason sent out Ryley Guay for a 35-yard field goal. On the field, Shurmur disagreed demonstratively. After the game, he was apologetic.

"Yeah, I can't do that on the field," the senior, who finished the day 23 for 32 for 258 yards, said. "We hadn't executed the last few times and that was the right call. That was bad on my part but it's that competitive fire."

Vaughn wasn't sure how many of his relations were in the stands Saturday, but it was a lot.

"He has family members all over Nashville," Shurmur joked about Vaughn. "Everywhere you go: 'Do you know Ke'Shawn?'"

The dozens in the stands saw Vaughn post 94 yards on 11 carries for two touchdowns. His second, a 46-yarder in the third quarter, showed his practice speed translates to Saturdays just fine.

All four running backs had solid days. Jamauri Wakefield went for 47 yards on eight carries and Khari Blasingame 32 on six. Josh Crawford finished with 37 on 10 carries and added a touchdown.

Mason said all the running backs "have a lot of love" for one other.

Vanderbilt: Facing three Top 25 teams the next four games — including trips to No. 8 Notre Dame and No. 3 Georgia — Saturday's win looks critical for Vanderbilt's bowl hopes, though Mason insisted the team is maintaining the week-by-week attitude he's emphasized throughout the summer and early autumn. And this week, that means prepping for the Irish and a trip to South Bend. "We get to go on the road for the first time and play a really good team," he said.

Nevada: The Wolf Pack square off against another Power 5 opponent, hosting the Pac-12's Oregon State in Reno on Saturday.