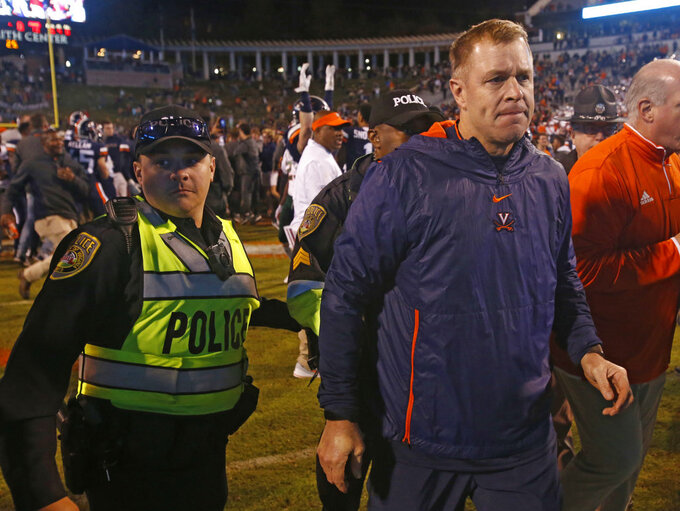 still in his uniform, Thornhill said the victory "woke everybody up" and declared the Cavaliers contenders to win the Atlantic Coast Conference championship.

"It's the next challenge in our program," the Cavaliers' third-year coach said.

Winning the ACC? Not exactly.

"That's an outright goal for every team in the league," he said of the title talk. "That they actually believe it enough to say it, that's a significant step."

The Cavaliers have won three straight in the series, and have arrived at the midpoint of the regular season in good position. But they were even better at 5-1 at this point a year ago and lost five of their last six, earning their first bowl bid since 2011.

"One emphasis this whole year, not just with this game, is we just have to finish," linebacker Chris Peace, one of three captains, said.

This week will be like last week, he said.

Mendenhall likes the increased confidence his team is showing, but isn't sure he appreciates them articulating it.

"A lot of time things are better left unsaid and you work and let the outcome speak for itself," he said. "The best way to not have one win now affect the next game is by the head coach framing a real demanding practice tomorrow to where it's almost all they can do to survive it, so that's what I plan to do."

Peace intends to join his coach in that message, mostly by reminding them of the nose-dive a year ago.

"You just gotta make sure you stay humble, stay grounded. Don't get ahead of yourself," he said. "I think that's one thing we did last year. Starting 5-1, we felt like we arrived, and this week for sure that will be a big emphasis. We're 4-2 and still got six more (regular-season) games to go.

"That's something I'm going to repeat probably a million times this week."

Another emphasis for the week with come from Mendenhall, who called the atmosphere against Miami the best he's seen in his time at Virginia.

The Cavaliers won't have that at Duke, and winning without fan support is another Mendenhall has laid out as a barometer of where the program stands.

"That atmosphere will be distinct and separate and much different than we just had," he said. "... That requires a higher level of maturity and consistency and program development. That's right where we are, and that's what we need. ... Where they go with that will determine a lot of what the outcome of this game will be."