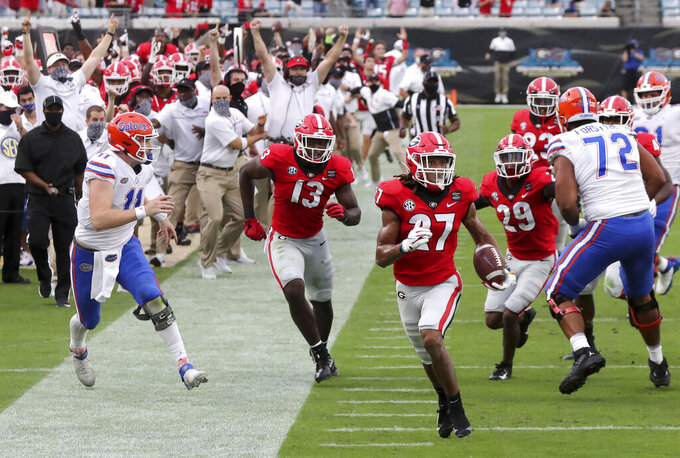 Georgia defensive back Eric Stokes (27) returns an interception for a touchdown during the second quarter of a NCAA college football, Saturday, Nov. 7, 2020, in Jacksonville, Fla. (Curtis Compton/Atlanta Journal-Constitution via AP)

The pandemic wrecked more plans across college football on Wednesday, with No. 12 Georgia at Missouri becoming the fourth game postponed in the Southeastern Conference alone and No. 3 Ohio State's visit to Maryland canceled because of a coronavirus outbreak among the Terrapins.

“This is certainly a week unlike any other,” SEC Commissioner Greg Sankey said. “I’ve repeatedly said (since March) that the circumstances around the virus will guide our decisions.”

While the SEC will assess rescheduling options, there are no open dates built into the Big Ten's nine-week schedule, and teams must play at least six games to qualify to play for the league championship. The Buckeyes are now down to seven games at most and No. 13 Wisconsin, which was favored to meet the Buckeyes in the league championship game, has already had two games canceled because of its own outbreak.

“Obviously, we are disappointed at not being able to compete this week, but I am incredibly proud of our team and the way they have handled themselves throughout this entire pandemic," Ohio State coach Ryan Day said.

Among the three SEC games still on for this Saturday, Arkansas will visit No. 6 Florida without Razorbacks coach Sam Pittman after he tested positive for the virus. Pittman said he has had some body aches, but is otherwise doing OK. He is isolating in his guest house with his dog.

“I’d be lying to you if I said I wasn’t somewhat depressed,” Pittman said.

No. 24 Auburn at Mississippi State; No. 1 Alabama at LSU; and No. 5 Texas A&M at Tennessee were all called off earlier this week. Both the Tigers-Bulldogs and Aggies-Volunteers games have been rescheduled for Dec. 12.

The SEC has said it is considering using Dec. 19 as a make up date for teams that are not involved in the league championship game that day. Georgia and Missouri share no open dates the rest of the way, but could be made up on Dec. 19.

With the Crimson Tide on track to play in the SEC title game, Alabama-LSU is in danger of not being played at all without some serious juggling of schedules.

“We want to play Alabama. It’s a great rivalry for us,” LSU coach Ed Orgeron said, and added he no idea when it could be arranged.

Sankey said at some point the SEC might have to prioritize making up games that could impact the championship race over those that don't, but the conference is not at that point yet.

Orgeron said he expects most of his players in quarantine due to contact tracing back next week. Between injuries and COVID-19 issues, the Tigers were using punter Zach Von Rosenberg as the second-team quarterback in practice this week, Orgeron said.

Texas A&M coach Jimbo Fisher said his team only had two positive cases as of Wednesday afternoon, but contact tracing had taken a toll. He said a couple of position groups were “greatly” impacted.

Fisher said the weekend road trip to South Carolina, using a small locker room and taking a plane trip, led to the multiple players landing in quarantine after being exposed to the infected individuals.

“We've got guys spread out all over but it's amazing on those air planes how close 6 feet is,” said Fisher, who was uncertain whether the Aggies would have enough players back to be able to play Mississippi on Nov. 21.

Sankey said the conference-wide positivity rate was under 1%.

“Candidly, the numbers around contact tracing have emerged as one of our biggest challenges to playing. We don’t control those policies existing in the public-health realm,” Sankey said.

Currently, the Centers for Disease Control and Prevention defines a high-risk contact in need of a 14-day quarantine as an individual who has been exposed to an infected person for a total of 15 minutes.

“The contact tracing has the potential to magnify even one positive test,” Sankey said.

Crimson Tide coach Nick Saban said his team would practice Saturday to try to keep the rhythm of a normal week, despite now having consecutive Saturdays off with last week's bye. He said players were given some time off to visit home, but it came with strict rules and a warning to be careful.

“Everyone trusts their family. I trust my family," Saban said. "But no one knows where Uncle Tommy has been.”