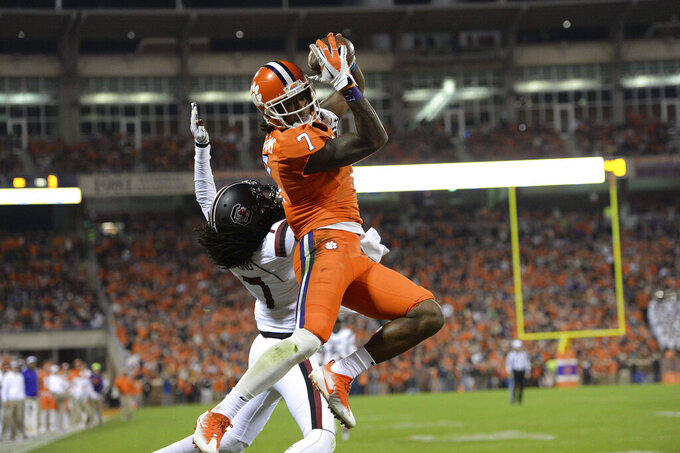 Clemson's Mike Williams pulls in a touchdown reception while defended by South Carolina's Jamarcus King during the first half of an NCAA college football game, Saturday, Nov. 26, 2016, in Clemson, S.C. (AP Photo/Richard Shiro) 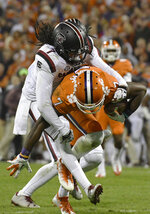 CLEMSON, S.C. (AP) — Clemson quarterback Deshaun Watson knew when the fourth-ranked Tigers' work was done against South Carolina — and shared that with the huge, appreciative crowd at Death Valley. Watson, playing his final home game, threw his third TD pass of the opening quarter for a 21-0 lead Saturday night, then placed his hands together and leaned his head against them as if to say, "Nighty night." The Gamecocks never woke up after that in Clemson's 56-7 domination, the team's largest margin of victory in the rivalry since a 51-0 win in 1900. Watson tied his career high with six touchdowns passes, three to Mike Williams in Clemson's latest step toward the College Football Playoff. "Offensively, those guys have had some incredible games in Death Valley," Clemson co-offensive coordinator Jeff Scott said. "We challenged them, 'Hey, let's make this last one the best one.'" It be hard to find another that meant as much to the Tigers (11-1, No. 4 CFP), who only need to defeat Virginia Tech in the Atlantic Coast Conference championship game next Saturday night to lock up a playoff spot. Watson pledged before he came he'd never lose to the Gamecocks (6-6) and leaves 3-0, the junior heading to the NFL after this season. "We wanted to jump on these boys real quick," Watson said. "That's the motto every game, put pressure on them and have them back on their heels." Watson finished with 347 yards and matched the six TDs he threw in his first college start against North Carolina in 2014. He also likely crept a bit closer in the Heisman Trophy race to Louisville quarterback Lamar Jackson, whose team lost for a second straight week. Watson and the Tigers also wiped out memories of their last Death Valley game, a stunning, 43-42 loss to underdog Pitt — Clemson's first home loss in more than three years. "We started the ball rolling last week and we're keeping the ball rolling," center Jay Guillermo said. "We're hitting our stride at a good time." Watson and Williams got things going with a 34-yard TD catch. Then Williams' dragged South Carolina's Jamarcus King on his for several yards during a 19-yard scoring catch. By the time Jordan Leggett scored on a wide open 11-yard grab, Clemson was in front to stay and Gamecocks defenders were yelling at each other. Wayne Gallman rushed for 112 yards and a touchdown. Williams caught six passes for 100 yards. Clemson's defense held the Gamecocks to 62 yards in the first half and posted its biggest margin of victory in the series since a 51-0 win in 1900. South Carolina avoided the shutout in the third quarter on a 33-yard halfback pass from Deebo Samuel to Bryan Edwards "There's not a lot to say," Gamecocks coach Will Muschamp said. "On the road recruiting tomorrow, that's the way we'll change our program." THE TAKEAWAY South Carolina certainly made strides over the second half with young players on offense like quarterback Jake Bentley and tailback Rico Dowdle. The Gamecocks will need to add a lot more talent on both sides of the ball before it can match up with the Tigers. Another month of practice and a favorable bowl opponent would still leave South Carolina feeling good about its progress this season. Clemson found its dominating form in its final home game of the season after its stunning, 43-42 fall to Pitt the last time here two weeks ago. More importantly, the Tigers showed a resolved it will need for a second straight trip to the College Football Playoff. If Clemson shows the same drive against Virginia Tech, there's no doubt it will play once again for a national title. POLL IMPLICATIONS Look for Clemson to move up a spot with No. 3 Michigan's loss to second-ranked Ohio State. CELEBRATIONS Clemson coach Dabo Swinney gave his seniors a lasting goodbye, allowing them to come on the field together before a fourth-quarter series, break the huddle and wave to the crowd before coming out of the game. He also had his defensive starters take an offside penalty so they, too, could leave to the cheers of 81,542 at Death Valley. Is this something South Carolina coach Will Muschamp will remember? "It is what it is," he said. INJURIES South Carolina freshman quarterback Jake Bentley did not return for the second half after what Muschamp said was a knee injury. He said Bentley had trouble pushing off it and the coach did not want to take a chance of hurting it further with the Gamecocks down 35-0 at the break. UP NEXT South Carolina will await its bowl destination, the most likely choice the Independence Bowl. Clemson will face Virginia Tech in the ACC championship game in Orlando, Florida, next Saturday night. ___ More AP college football: www.collegefootball.ap.org and https://twitter.com/AP_Top25