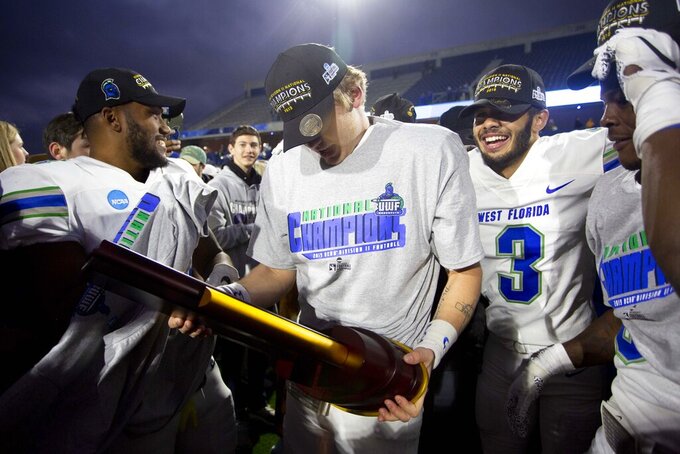 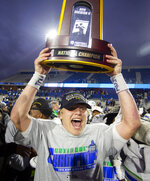 McKINNEY, Texas (AP) — Backed up to his 1-yard line in the final minute of the first half in the NCAA Division II championship game, West Florida quarterback Austin Reed told his coaches to run four receivers straight up the field.

Coach Pete Shinnick wasn't so sure, but they found a compromise, and 99 yards later, had a title game record for passing yards before halftime.

Reed threw for 399 of his 523 yards in the first half, and West Florida hung on for a 48-40 victory over Minnesota State on Saturday in a matchup of teams seeking a first title.

The redshirt freshman had to wait until the second half to break the record for touchdown passes, finishing with six after tying the previous mark of five in the first half.

Three of the scores went to Quentin Randolph, who ended up 16 yards short of the title game record with 254 yards receiving.

Reed broke the previous title-game mark of 361 yards passing on a 48-yard touchdown to Randolph for a 38-21 lead with 18 seconds left in the first half. That score came three plays after a 37-yarder to get the Argonauts away from the goal line.

“When Austin’s throwing the ball like that, I know that he’s locked in,” said Randolph, who had 10 catches. “With a gunslinger like this, you’ve got to keep your head down and run as fast as you can and not look back to the ball, he’ll overthrow you. He put balls on the money today.”

West Florida, the first NCAA football team to reach the postseason twice in its first four years of existence, improved to 9-1 in the playoffs, including 8-0 on the road. The loss was to Texas A&M-Commerce in the 2017 championship game.

It was also the second title game appearance for the Mavericks, who entered the game with the top scoring offense in Division II and the No. 2 scoring defense but were trumped on both counts.

“We were in a little bit of a shell-shocked mode,” Minnesota State coach Todd Hoffner said. “The biggest thing that probably hurts the most is we were letting them behind us. In the second half, we didn’t let them behind us.”

Ryan Schlichte threw for 309 yards and two touchdowns, the second followed by a 2-point conversion pass that got Minnesota State within eight with 4:03 remaining.

The Mavericks drove to the West Florida 18 in the final minute, but Schlichte's fourth-down pass to top receiver Shane Zylstra was broken up.

The surge led by Reed, who was 33 of 54 passing, took away Minnesota State's biggest threat in running back Nate Gunn, although an injury sidelined the team's leading rusher with the Mavericks also forced to pass after halftime.

Gunn came in with 1,611 yards and 29 touchdowns but finished with 19 carries for 56 yards and two touchdowns. The senior had just two carries in the second half.

Down 17 on the opening possession of the third quarter, Minnesota State lost a fumble by Gunn inside the West Florida 10. After sacking Reed at the 1 on third down, the Mavericks gave the ball right back when Justin Arnold muffed the punt near midfield. Reed's sixth TD pass soon followed.

West Florida's Tate Lehtio and Arnold finished with 13 catches apiece to break the championship game record of 11. Lehtio has 139 yards and a touchdown.

Arnold had 154 yards and a score while Zylstra finished with 11 catches for 145 yards and a TD for Minnesota State. The Mavericks lost to Colorado State-Pueblo in the 2014 title game.