Whitmer: Mask order applies to Big Ten, but may be changed 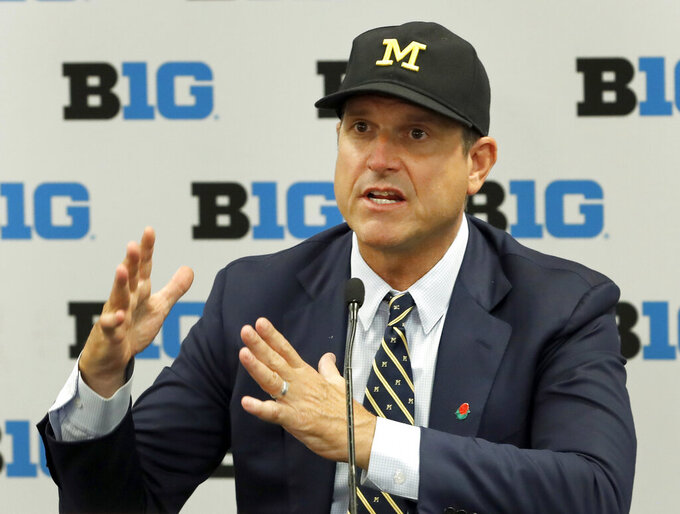 FILE - In this July 19, 2019, file photo, Michigan head coach Jim Harbaugh responds to a question during the Big Ten Conference NCAA college football media days in Chicago. Big Ten is going to give fall football a shot after all. Less than five weeks after pushing football and other fall sports to spring in the name of player safety during the pandemic, the conference changed course Wednesday, Sept. 16, 2020, and said it plans to begin its season the weekend of Oct. 23-24.(AP Photo/Charles Rex Arbogast, File)

LANSING, Mich (AP) — Gov. Gretchen Whitmer's office said Thursday her requirement that athletes wear masks applies to Big Ten football in Michigan, but a face shield will suffice for players and the administration is open to potentially changing the order.

Her office said it will talk to the conference about the mandate, which covers organized sports in which athletes cannot keep distance “except for occasional and fleeting moments.” The state measure exempts professional sports and amateur sports like tennis, golf, cross country, baseball and softball.

The Big Ten announced Wednesday it plans to open its football season the weekend of Oct. 23-24, reversing a decision to push fall sports to the spring in the name of player safety during the coronavirus pandemic.

The Democratic governor's order covers both training and competition.

Asked if the order could be revised before Big Ten football starts, he told The Associated Press: “This development just came yesterday from the Big Ten. I think we're certainly open to having conversations."

Whitmer spokeswoman Tiffany Brown later said the state reached out to the conference “to discuss further as it may be fitting to treat the Big Ten more like professional sports — as they are very stringent and there are clear rules and guidance in place.”

The Big Ten is banking on daily testing to mitigate the risk of outbreaks. The Big Ten will begin daily antigen testing of all fall sports athletes, coaches and staff Sept. 30.

University of Michigan athletics spokesman Dave Ablauf said the Wolverines have been following the order.