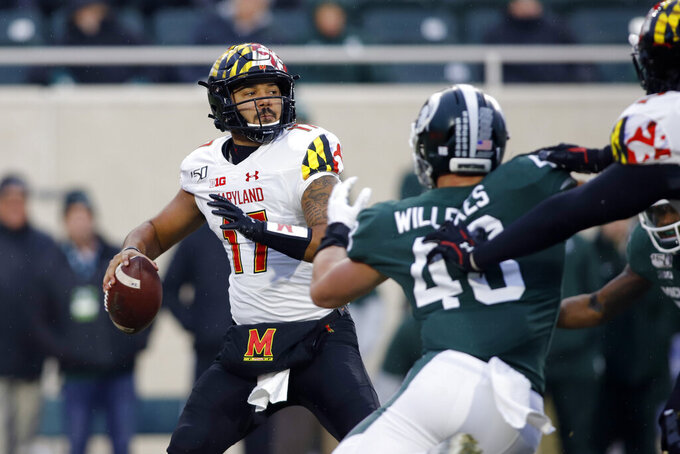 Almost a year to the day after breaking his leg, Kenny Willekes is ready for his Michigan State swan song.

As usual, he's trying to think of himself as an underdog.

“Always," he said. "That's the way you've got to play, that's the mentality I play with. I play with a chip on my shoulder regardless. I still feel like I got a lot to prove.”

Willekes already holds a school record with 49 1/2 tackles for loss in his career, and the senior defensive end has nine sacks this season. But the honor that best exemplifies his path at Michigan State may be the one he received earlier this month. Willekes was the 2019 winner of the Burlsworth Trophy, which goes to the nation's most outstanding player who began his career as a walk-on.

Brandon Burlsworth was a walk-on who eventually became a standout at Arkansas. He died in a car accident 11 days after being drafted by the Indianapolis Colts in 1999. The award bearing his name has gone to players such as Baker Mayfield and Hunter Renfrow.

Michigan State faces Wake Forest in the Pinstripe Bowl on Friday. For Willekes, it's a chance to finish his college career on a positive note — and another opportunity to move on from his difficult experience last year, when Willekes broke his leg in a 7-6 loss to Oregon in the Redbox Bowl.

After that injury, Willekes returned to Michigan State for his senior season. He remained a force on the defensive line. With one game to go, it would have been hard to blame him if he'd decided to sit out this bowl — especially after what happened last year. Instead, he's playing.

Willekes redshirted in 2015, and he hardly played the following season, but coach Mark Dantonio eventually saw the potential.

“Kenny is relentless. I started thinking he could be a player for us in the spring of 2017 when he finally got opportunities,” Dantonio said. “He's a smart player, a tough player."

Willekes earned a scholarship that spring and had seven sacks in the 2017 season. Then he added 8 1/2 more sacks in 2018. He was a first-team selection to the AP's All-Big Ten team in 2018, and although the injury was a sour way to finish that year, he was able to recover in time for this season.

The broken leg was just another obstacle for him to overcome, and although the Spartans have had their setbacks this season, Willekes moved up to fourth on the school's career list with 24 1/2 sacks. He's only a half-sack behind Julian Peterson for third place, and if he has a really big game this week, perhaps second-place Shilique Calhoun is within reach at 27.

Not bad for a player who — a few years ago, at least — very much looked the part of an underdog.

“I've seen how far he came,” senior defensive tackle Raequan Williams said. "I was here when he couldn't run straight, so it's kind of crazy that he's turned into the player that he is. I just feel very fortunate for him — and very happy for him.”