Wilson carves up UCF in likely final game for No. 13 BYU 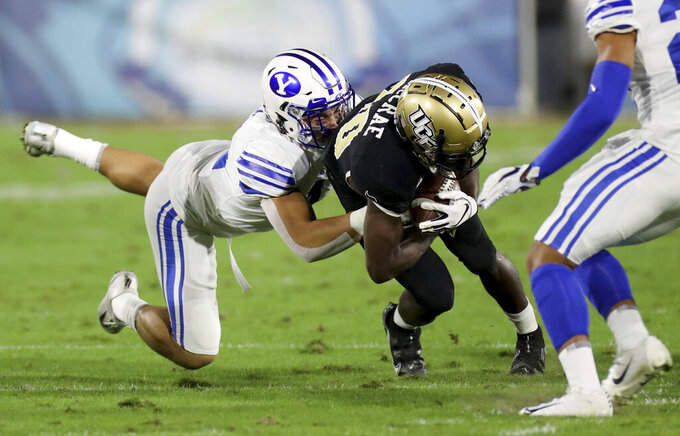 Wilson threw for 425 yards with three touchdown passes and two rushing scores as No. 13 BYU routed UCF 49-23 in the Boca Raton Bowl on Tuesday night.

Wilson, considered a top prospect, completed 26 of 34 passes in what might be his final college game.

“I don’t know yet,” Wilson said when asked about his plans. ”I’m probably going to enjoy the Christmas break and discuss with coaches, discuss with my family and figure out what’s best. Obviously, (a decision) probably has to be before the new year.”

Tyler Allgeier carried 19 times for 177 yards and a score. Isaac Rex had five catches for 96 yards and two touchdowns as BYU earned its first victory in nine games it has played in the Sunshine State.

“The excitement we had to play this game was special,” Wilson said. “Just looking around and soaking it all in was the coolest part.”

Dillon Gabriel was 21 of 45 for 217 yards and two TDs for the Knights (6-4). He had a stretch of nine straight incompletions bridging the second and third quarters.

BYU dominated the first half, outgaining UCF 434 yards to 227 despite running 11 fewer plays.

The Cougars led 14-0 less than four minutes into the game after scoring on its first two drives, each more than 70 yards and less than 1:50 in duration.

“If they can score, I really don’t care how much time they burn on the clock,” BYU coach Kalani Sitake said. “We have to play a certain style of defense that will match that and complement what our offense is going to do.”

Wilson finished the first drive by running 15 yards on a quarterback draw. On BYU’s next possession, he hit Rex for a 36-yard TD pass on a reverse flea-flicker.

UCF defensive back Divaad Wilson was penalized for targeting late in the first quarter and was disqualified.

After UCF scored early in the second quarter, Wilson threw two more TD passes. He connected with wide-open tight end Isaac Rex from 27 yards out, and his third scoring pass of the half was a 35-yard strike to Neil Pau’u with 3:31 remaining to make it 35-7.

“He’s a great player, that’s why he’s viewed the way he is by the NFL,” UCF coach Josh Heupel said.

UCF: The Knights came in averaging 373 passing yards per game, second in the nation, but managed 217 yards against BYU.

BYU: The Cougars had been winless in three previous Florida bowls. They lost in the 1976 Tangerine Bowl, 1985 Florida Citrus Bowl and 2014 Miami Beach Bowl.

UCF: This was UCF’s school-best fifth straight bowl appearance. The Knights fell to 2-3 in those games.

BYU: Opens the 2021 season against Arizona on Sept. 2 at Allegiant Stadium in Las Vegas, presumably without Wilson.

UCF: Gabriel is expected to return for his junior season and lead the Knights against Boise State on Sept. 4 in Orlando.