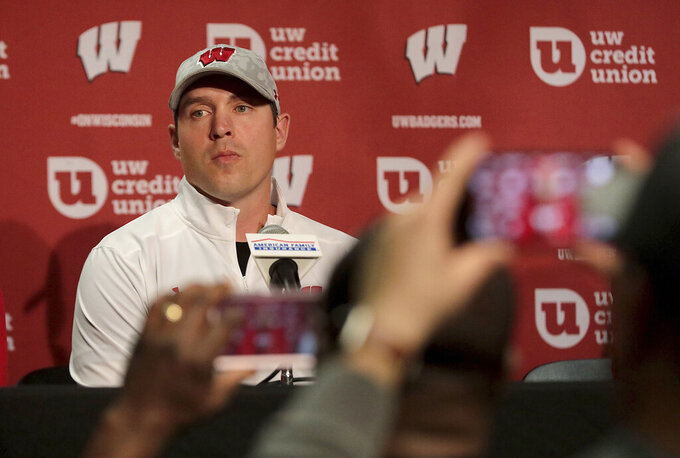 Line: Wisconsin by 9½, according to FanDuel Sportsbook

Wisconsin visits Northwestern in its first game under interim coach Jim Leonhard after the firing of Paul Chryst. The Badgers are coming off back-to-back losses by a combined 55 points to Ohio State and Illinois. Northwestern has dropped four straight since opening with a win over Nebraska and is 6-15 since it beat the Badgers at home in 2020. The Wildcats lost 17-7 at Penn State last week.

Wisconsin RB Braelon Allen vs. Northwestern's defensive line. Illinois held Wisconsin to its lowest rushing total since 2015. Considering the Wildcats are giving up 172.6 yards rushing per game, this looks like a bounce-back opportunity. Allen had 2 yards on eight attempts last week after averaging 124.3 yards in the first four games. He has run for at least 100 yards in 10 of his past 14 outings.

Wisconsin: QB Graham Mertz. The run game wasn't the only part of the offense that failed last week. Mertz had a rough outing, too. He got sacked five times and intercepted twice while completing 17 of 32 passes for 206 yards and a touchdown.

Northwestern: QB Ryan Hilinski. Hilinski leads the Big Ten with 1,429 yards passing, though he ranks just 12th in completion percentage. He has almost as many interceptions (four) as touchdown passes (six).

The teams have split the past four meetings, with the host winning each time. ... With seven games remaining, Wisconsin is trying to avoid its first losing season since going 5-7 in 2001. ... The Badgers were tied for sixth in the nation and the Big Ten lead with eight interceptions. ... OLB Nick Herbig is tied for second in the conference with four sacks. ... Northwestern leads the nation with nine lost fumbles and has committed 13 turnovers. Only Utah State (15) has given the ball away more times. ... RB Evan Hull ranks fourth in the nation with 164 all-purpose yards per game.