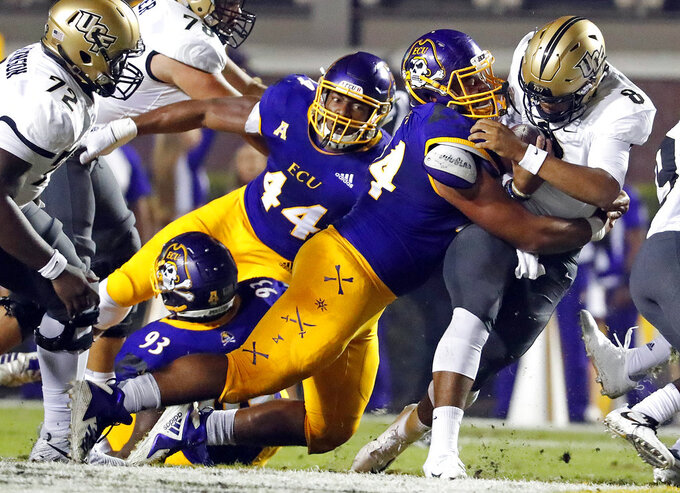 Central Florida's Darriel Mack Jr. (8) is tackled by East Carolina's Alex Turner (94) with Kendall Futrell (44) looking on during the first half of an NCAA college football game in Greenville, N.C., Saturday, Oct. 20, 2018. (AP Photo/Karl B DeBlaker)

GREENVILLE, N.C. (AP) — No. 10 UCF didn't have its Heisman Trophy hopeful, so the Knights' opportunistic defense kept taking the ball from East Carolina and giving it to their backup quarterback.

Darriel Mack Jr. stepped in for McKenzie Milton and rushed for 120 yards and a touchdown, and UCF forced five turnovers in beating East Carolina 37-10 for its 20th straight victory.

"All we need is one play," Mack said. "Our defense is going to hold (the opponent) down, no matter what happens. Somebody just getting thrown into the fire like that, first game starting, and our defense is just playing lights out the whole game. I can't thank those guys enough."

Nate Evans returned a fumble 94 yards for a momentum-changing touchdown with 10:07 left, Greg McCrae added a 74-yard TD run and the Knights (7-0, 4-0 American Athletic Conference) turned all those takeaways into 24 points.

"I just think our football team continues to compete," coach Josh Heupel said. "We just continue to keep competing, no matter what's going on, and that's the sign of a really mature football team."

UCF was outgained 496 total yards to 427, but the Knights went up 20-3 by scoring on four consecutive possessions in the second quarter, then made it a full-fledged rout with those late big plays.

With Milton sitting this one out while in full uniform from the sideline — and Heupel saying the decision to rest him was made following pregame warmups for "overall health" reasons — Mack was 12 of 20 for 69 yards but was more dangerous with his legs, rushing 7 yards for an early touchdown.

"His decision was perfect early in the night," Heupel said of Mack. "Darriel, from the get-go, was really in tune with what was going on."

Freshman Holton Ahlers was 29 of 53 for 406 yards with a 29-yard touchdown pass to Trevon Brown, and added 69 yards rushing in his first start. But his fumble while attempting a jump pass inside the 5-yard line was returned by Evans for the game-sealing score.

"Every single time we got into a situation, we either turned the ball over, or we didn't make a good decision," ECU coach Scottie Montgomery said.

The Pirates (2-5, 0-4) have lost three straight and four of five. Jake Verity put ECU up 3-0 midway through the first with a 34-yard field goal.

UCF: The big question in the aftermath of this one centered on Milton, after the quarterback said earlier in the week that he tweaked his ankle while scoring the go-ahead touchdown a week earlier at Memphis. The Knights missed him perhaps more than the final score would indicate — ECU was on the verge of making this a one-score game with 10 minutes left before Evans' fumble return. Now UCF has an open week to get him closer to 100 percent before a visit to dangerous Temple — which took down No. 20 Cincinnati on Saturday.

East Carolina: The Pirates lost their sixth straight against Top 25 opponents, haven't beaten one since 2014 and haven't knocked off a top-10 team in a decade. But this one didn't feel like so many of the others — and not necessarily because the Knights weren't at full strength. This was a measurable sign of progress, because each of ECU's previous four ranked opponents hung at least 60 points on them.

"The hardest part of it all is playing clean enough to not turn the football over," Montgomery said. "You can see the energy on our team and it's moving up, but it just was killed tonight a little bit by turning the football over."

Those big plays will make the box score of this one look a lot better for UCF and might impress the voters enough to earn a slight bump. Winning a conference road game — and covering the 21-point spread — without a Heisman hopeful will go a long way toward masking just how close this game was before Evans' fumble return.

East Carolina was on the verge of pulling within a touchdown, with Ahlers leading the Pirates from inside their own 1-yard line to the UCF 1 early in the fourth. But as he tried a Tim Tebow-style jump pass, Kyle Gibson forced him to fumble and Evans scooped it up, taking it the distance to put the Knights up 30-10.

All the turnovers. The Knights, who entered with the seventh-best turnover margin in the Bowl Subdivision with an average of plus-1.33, were at plus-5 in this one with the four forced fumbles and the interception. Ahlers' pick was the ninth thrown by the Pirates this season.

UCF: Has an open weekend before trying for their 21st consecutive victory on Nov. 1 against Temple.

East Carolina: Also has no game until playing host to Memphis on Nov. 3.