In Year 2 under coach, QB, BC gets more flavorful playbook 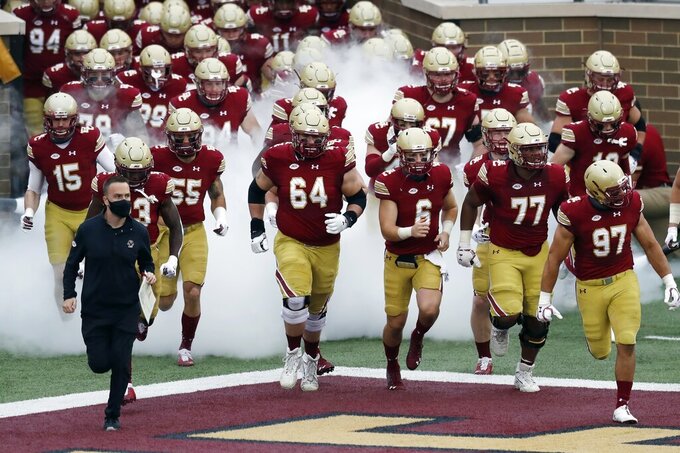 FILE - In this Oct. 24, 2020, file photo, Boston College head coach Jeff Hafley, left, leads his team onto the field before an NCAA college football game against Georgia Tech in Boston. After taking over at Boston College just before the pandemic broke out, Hafley isn't looking for things to get back to normal. (AP Photo/Michael Dwyer, File)

BOSTON (AP) — Jeff Hafley was forced to keep his offense bland in his first season at Boston College, when the pandemic limited his ability to expand the playbook for transfer quarterback Phil Jurkovec.

This year could be bursting with flavor.

“We were so vanilla last year when you think about it, because we had no training camp and a spring ball with five practices,” Hafley said recently as he prepared for his second season in Chestnut Hill.

“We know who we are right now and what Phil can do because we had an offseason and spring ball and training camp,” Hafley said. “So, it is going to be a lot different, and I’m excited.”

One of the most prolific passers in Pennsylvania high school history, Jurkovec started at Notre Dame before transferring to BC in 2020. Although he received a waiver that would allow him to play immediately, his late arrival combined with the pandemic to prevent Hafley from unleashing his full potential.

“The first year, the install was tough because of everything that happened. It was kind of up in the air,” Jurkovec said. “But we’ve had a lot of time with it now, ... (there’s) a comfort level of being in the offense and knowing these plays.”

Even with a limited playbook, Jurkovec threw for 2,558 yards — the most ever by a BC quarterback in his first 10 games. He was also the first BC quarterback to throw for more than 300 yards in four of his first five starts.

The coaches expect even more in Year 2.

“You’re seeing a young man that is getting better at every phase of playing the quarterback position,” offensive coordinator Frank Cignetti said. “Now that he’s been here a year, and he feels more comfortable being the quarterback, he’s obviously become a better leader in the locker room and on the field.”

Jurkovec will lead the Eagles (6-5 last year) against Colgate (0-2) of the FCS in the opener on Saturday.

Stan Dakosty will be making his debut as the Raiders head coach. But he has plenty of history on their sidelines.

Dakosty played two years at Colgate and was a student assistant under longtime coach Dick Biddle when the Raiders reached the Division I-AA championship game in 2003. He joined the coaching staff in 2007, took over defensive backs in 2010 and was promoted to associate head coach in 2017.

Boston College will have gone 665 days since its last game in front of fans at home, a Nov. 9, 2019, loss to Florida State. The Eagles went 4-2 in an empty Alumni Stadium last season.

After living under the pandemic restrictions all season — and making it until the final week without a positive coronavirus test — the BC players decided to forgo a bowl game.

BC defensive coordinator Tem Lukabu was a linebacker on the Colgate team that won back-to-back Patriot League championships in 2002 and ’03 and was the first player in conference history to be named its defensive player of the year twice.

He was also a finalist for the Buck Buchanan Award that went to the Division I-AA defensive player of the year.

“We joke with Tem about not giving the playbook to Colgate,” Hafley said.