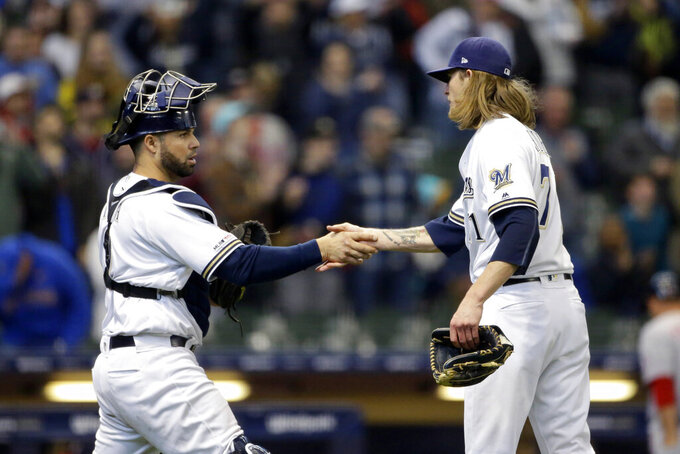 Milwaukee Brewers' Josh Hader, right, shakes hands with Manny Pina after recording a save during the ninth inning of a baseball game against the Washington Nationals, Wednesday, May 8, 2019, in Milwaukee. (AP Photo/Aaron Gash)

The reigning NL MVP connected in the first inning for his major league-leading 16th home run and the Brewers won their sixth straight game, beating the Washington Nationals 7-3 on Wednesday.

Yelich's solo drive came on the fourth pitch of the afternoon from Jeremy Hellickson (2-1).

"Swing at good pitches," said Yelich, who finished with three hits and scored twice. "Whether it's the first pitch, the last pitch, somewhere in-between."

The Nationals lost all three at Miller Park, marking the first time they've been swept this season, and have dropped four in a row overall.

Washington loaded the bases with one out in the ninth inning, but Josh Hader struck out pinch-hitter Kurt Suzuki and Adam Eaton for his 10th save in 10 chances.

"We battled back again, but we've got to start playing clean baseball, stop giving other teams 30 outs and playing good baseball," Washington manager Dave Martinez said. "If you think about it, on the other end, we have 27 outs, 13 of them were strikeouts, so we've got to start putting the ball in play."

The Brewers took advantage of Washington misplays to make it 4-0 in the first inning. After third baseman Anthony Rendon made an error on Mike Moustakas' grounder and Hellickson walked Ryan Braun, left fielder Adam Eaton overran a towering flyball by Eric Thames that dropped a few feet into fair territory and bounced into the seats for a ground-rule double, scoring Moustakas.

Moustakas hit a two-run homer for a 6-0 in the second. Pina connected in the fifth for his first home run of the season.

Brandon Woodruff (5-1) struck out a career-high nine while notching his third straight win. He gave up one run in six innings.

"I tell myself to just go out every inning and attack the guys, and get strike one first, go right after them," Woodruff said.

The Nationals made it 7-3 with two runs in the seventh off Matt Albers. Wilmer Difo had an RBI single and later scored on a sacrifice fly by pinch-hitter Howie Kendrick.

RIGHT DOWN THE MIDDLE

Woodruff was especially effective facing the meat of the Nationals' order. Six of his strikeouts came against Washington's No. 3, 4 and 5 hitters (Rendon twice, Gomes three times and Brian Dozier once).

Clemson coach Dabo Swinney, whose team won the college football championship last season, threw out a ceremonial first pitch. He was accompanied by former Brewers infielder Bill Spiers, who was a Clemson punter and is now a member of Swinney's staff.

Nationals: OF Juan Soto (back spasms) is expected to return from the injured list on Saturday, Martinez said.

Nationals: Thursday against the Dodgers in Los Angeles. Patrick Corbin (2-1, 3.71 ERA) gave up three runs in six innings in his last start, May 4 at Philadelphia.

Brewers: Friday in Chicago against the Cubs. Gio Gonzalez (0-0, 2.61 ERA) makes his third start since being signed as a free agent on April 27.