Young says Heisman reflects past as Bama seeks another title 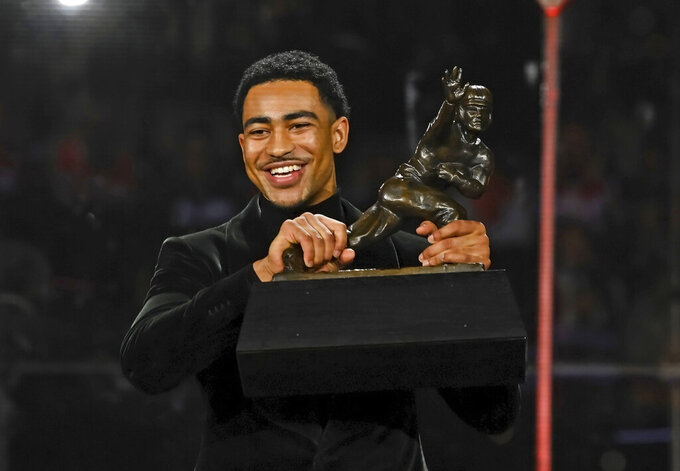 Bryce Young views his Heisman Trophy as about what he and Alabama have already done, not what the top-ranked Crimson Tide are still trying to accomplish in his first season as the starting quarterback.

“It reflects what I’ve done in the past, which is a huge blessing,” Young said this week before the CFP semifinal at the Cotton Bowl. “That doesn’t entitle me to anything in future. … That’s a looking-back-type of trophy.”

The Heisman-wining play this season by Young is a big reason why the Tide (12-1) is back in the College Football Playoff with a chance to win a second consecutive national title. Alabama plays undefeated and fourth-ranked Cincinnati on Friday.

First-year Alabama offensive coordinator Bill O’Brien said when Young returned to Tuscaloosa from New York after the award ceremony, the quarterback told him, “Look, I’m very grateful and very honored to be the Heisman Trophy winner, but we have more to do. There’s more out there for me to do.”

Even after throwing for 4,322 yards with 43 TDs and only four interceptions. Even after directing a late 97-yard, game-tying scoring drive in a four-OT victory over Auburn in the regular season finale, then setting an SEC championship game record with 421 yards passing in a 41-24 victory over a Georgia team that was undefeated and had given up only 83 total points in its 12 regular-season games.

“He’s a young man that really gets it, and he’s practiced really well the last couple weeks for a very, very challenging game on Friday," O’Brien said. “I can’t emphasize enough the special qualities that Bryce has.”

Young, a former five-star recruit from Southern California, was the backup as a true freshman to Mac Jones last year when Alabama won its sixth national championship in 12 seasons. Jones was the fifth Bama quarterback in that span to win a title in his first year as the starter, following Jalen Hurts in 2017. Jones and Hurts are both now starting in the NFL.

Back in early August before the season, O’Brien talked about the trust that has to be developed between coaches and the quarterback who is like a coach on the field.

That process for O’Brien and Young began in January. The fired Houston Texans head coach, previously Tom Brady’s quarterbacks coach in New England, was hired about 10 days after the national championship gam e to replace Steve Sarkisian, now the coach at Texas.

“For (O'Brien) to have the coaching legacy he’s had, to coach the players and just to have the resume he had, he could have easily came in and said, ‘Just sit down, be quiet, and this is where you’re going throw the ball. This is what I’m going to call,’” Young said.

Instead, O’Brien leaned quite a bit on a still-ongoing dialogue with Young about Alabama’s offense.

“For him to have that attitude when he first got here and us to be able to build and grow off that throughout the year, I’m eternally grateful for that,” Young said.

For his part, O'Brien noticed Young's deep grasp of the offense right away.

As for his competitive nature, Young describes it as a process that is more than just what happens on the field during games. It's more than one moment.

Running back Brian Robinson said teammates see Young as a poised, humble guy in how he handles things. They also get to see the moments when the quarterback raps his favorite lyrics while listening to music.

“He’s human just like us. He likes to have a good time, too, even though many people might not be able to see it,” Robinson said “When he’s on the field, it’s just a different side of him.”