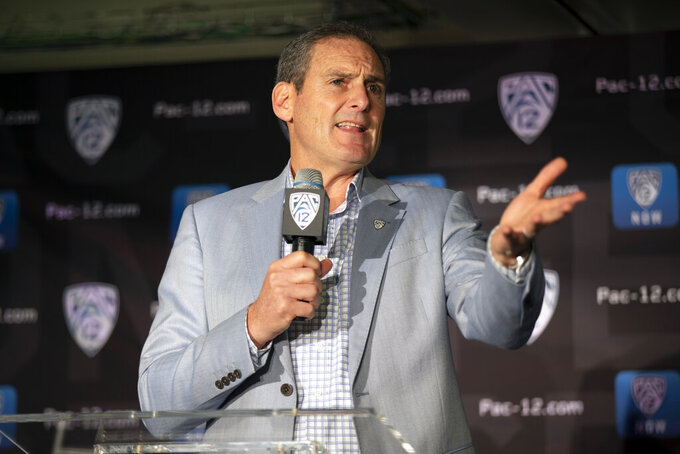 He came to the then-Pac-10 from the Women's Tennis Association as an outsider to college sports and led a vital transformation of the conference with expansion from 10 to 12 members and a record-setting, billion-dollar media rights deal.

But the Pac-12 also struggled to keep up with some of its Power Five conference peers in high-profile sports — most notably football —- and in revenue generation for its members during Scott's time. He has also been criticized for being out of touch with campus-level administrators and fans. During his time in the conference, there have been 28 full-time athletic directors at the 12 member schools, with each having at least two.

Scott spoke to The Associated Press on Monday in a 25-minute telephone interview about his time with the Pac-12:

Q: What do you think the Pac-12 could have done under you leadership to help better position the conference's football programs to be more successful?

Scott: I'm sure looking back we could probably identify some small things we would have done differently, but all the strategies around football and other sports were in alignment with all of our schools and our football coaches. USC, Oregon, Stanford, Washington not getting to the playoffs more often or winning has very little to do with the conference office. Between compliance issues, coaching changes and other things, some of our traditional powerhouses have struggled the last few years, and that’s hurt the league overall.

Q: In what ways did not having a background in college sports help you do this job?

Scott: When I was hired by 10 presidents and chancellors, they were very much looking for a fresh approach, a bold and innovative transformation and outside-the-box thinking. That was appealing to me coming from professional sports, where I had been for over 20 years. And I think we delivered on that vision, taking a big swing for a Pac-16, ultimately expanding to 12, being the first conference to add events in China, creating our own wholly owned media company, being a leader when it came to student-athlete reform and welfare, doing more than other conferences here during that space. So there was a lot of alignment with what our presidents and chancellors wanted at that time. So there were some significant advantages.

And lastly, taking a fresh look at postseason college football and being part of the group that led the change from the BCS to the College Football Playoff. All those things happened in the first few years when I was there with the group of presidents that hired me.

(The College Football Playoff management committee, which Scott is a member of along with the other FBS conference commissioners and Notre Dame's athletic director, will meet next week at the Big Ten offices outside Chicago. Scott said he and incoming Pac-12 Commissioner George Kliavkoff plan to attend).

Q: In what ways was not having experience in college sports a hurdle to overcome?

Scott: I'd say being an outsider it’s hard to fully appreciate the complexities and bureaucracy of the NCAA and the ability to get things done nationally. I didn’t fully appreciate the challenges in the turnover on our campuses and how many times presidents and athletic directors and coaches changed in the 11 years that I was here. And when you go through challenging times, not having been someone that’s been on a campus is an easy shot for people to take. Like any strong leader, you try to complement yourself with skills and experience. So when I started, I hired Kevin Weiberg, one of the most experienced commissioners out there to be my deputy. When Kevin moved I hired Jamie Zaninovich (former West Coast Conference Commissioner) to be my deputy.

Q: Do you believe some of the criticism was warranted?

Scott: I think over an 11-year history with a lot of big swings and bold ideas and given the very public nature of what we do, there are certainly some re-dos I’d like. We had a couple of scandals in officiating, some of which we could have avoided. There were some optics issues, around expenditures that we made that people were sensitive to.

As examples, if I could hit the rewind, it would have been shorter TV deals if I had a crystal ball and knew the short-term pressures and the reactions people would have to the SEC and Big Ten redoing their deals a few years before us. There were absolutely some adjustments I would make. But the big strategic swings where we were in complete alignment with our presidents at the time, and our ADs at the time, I feel very, very good about it. And I think history will prove the wisdom of the steps that we've made.