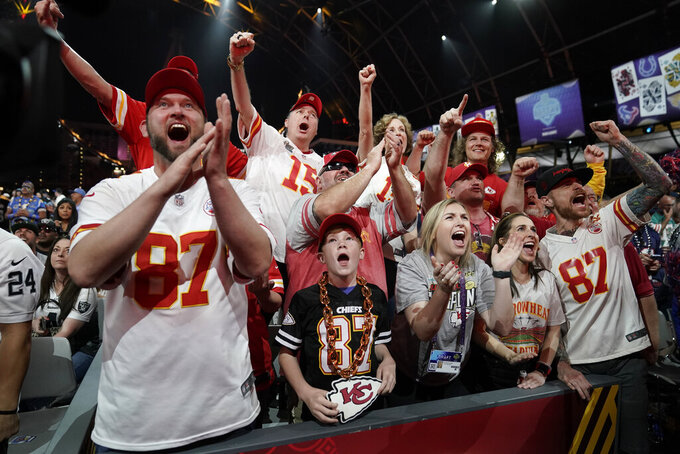 There are stars to be found in the final rounds of the NFL draft. They're just not easy to spot.

Dallas quarterback Dak Prescott and Vikings quarterback Kirk Cousins both were taken in the fourth round and went on to become Pro Bowl passers.

The Chiefs drafted All-Pro receiver Tyreek Hill, now with the Miami, in the fifth round in 2016.

You might have heard, but Tom Brady was sixth-round pick by the Patriots in 2000, No. 199 overall.

Heading into Day 3 of the draft Saturday, there's plenty of talented players and potential starters out there. And maybe a few hidden gems.

The six most intriguing players left on the board.

There was a point last summer when it wasn't a stretch to think Howell could be the first quarterback taken in this draft. That seems like a long time ago.

He gets compared to Baker Mayfield because of his size (6-feet, 218 pounds) and moxie, but he's probably a better athlete than the former first overall pick —- but not as polished a passer.

He is the odds-on favorite to be the next quarterback taken, though Nevada's Carson Strong, a big pocket passer who has had some issues with his knee, could be tempting for upside.

The final few rounds of the draft tend to be corner heavy, with teams stocking up on the best athletes available at highly valued position.

Woolen has all the measurables. At 6-4 and 205 pounds, Woolen ran a 4.26 in the 40 at the combine. He has a lot of work to do on technique and fundamentals, but physically he is the prototype.

For teams looking for more of a finished product at cornerback, Cincinnati's Coby Bryant won the Thorpe Award as the nation's best defensive back, seeing a lot of action playing across first-round pick Sauce Gardner last season.

The biggest prospect in the draft at 6-8 and 384 pounds. The Australian was a rugby player growing up before sliding over to football after coming to the states.

He is a bit stiff and still relatively new to the game, but he is a mountain of a man with enough athleticism to start 31 games in three college seasons.

Kentucky's Darian Kinnard is probably a safer bet to be a productive pro, even though most teams have the college tackle sliding inside to play guard in the NFL.

Only six running backs have been taken so far, all on Day 2. Expect a whole bunch more on Day 3 as teams look for complimentary players with potential to be lead backs.

Pierce was a player who probably didn't get the ball enough during his time at Florida. He had just 374 combined carries and catches in four seasons, but averaged 6.0 yards per touch and scored 28 touchdowns.

He runs hard and weighs 215 pounds.

Texas A&M's Isaiah Spiller is a similar power back who figures to be taken sometime in round four or five. Notre Dame's Kyren Williams has a more diverse skill set.

There will be more receivers taken. Plenty more, including Ross. The 6-4, 205-pounder looked like a potential first-rounder as freshman, helping Trevor Lawrence and the Tigers win a national title in 2018.

His sophomore year wasn't quite as good, and a neck injury sideline him for all of 2020. He returned last season, but like Clemson's entire offense showed only flashes of his talent. He had 46 catches for 514 yards and three touchdowns. Is there a Tee Higgins-type receiver still in there?

Memphis' Calvin Austin III and Boise State's Khalil Shakir should be among the first receivers to go on Day 3.

The “Punt God” is a field-flipping weapon and touchback machine on kickoffs. As a field goal kicker he is strong-legged, but inconsistent.