Huskers pay premium for Rhule to bring back program's glory 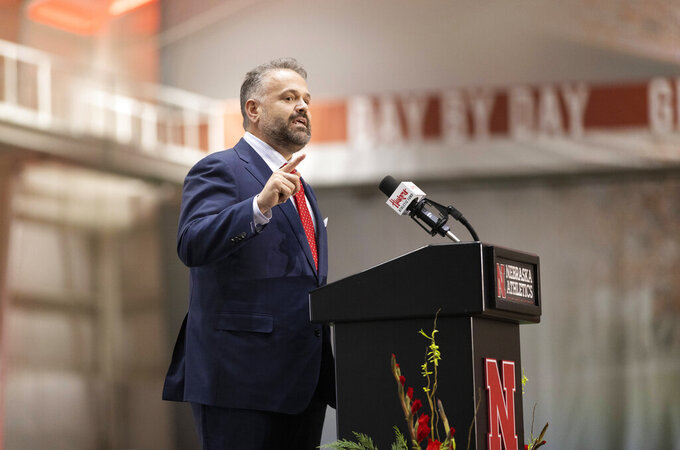 LINCOLN, Neb. (AP) — Matt Rhule said he had plenty of options after he got fired by the Carolina Panthers. He could have taken a year off from football or worked in television.

Or he could jump back into college coaching. A number of schools reached out to him, he said, but only one appealed to him and his family.

Nebraska introduced Rhule as its coach on Monday, exactly seven weeks after the Panthers fired him five games into his third season. Awaiting him is the daunting task of taking over a team coming off a sixth straight losing season and a program that's a shell of what once was one of the biggest brands in the college game.

Rhule signed an eight-year, $74 million contract that makes him the third highest-paid coach in the Big Ten behind Ohio State's Ryan Day and Michigan State's Mel Tucker and among the top 10 nationally.

Athletic director Trev Alberts said the contract is 90% guaranteed and that some of the compensation is deferred. Rhule will have a pool of $7 million to spend on assistant coaches.

When the Panthers fired Rhule, he was still owed $34 million on his seven-year contract. Alberts said the Panthers were involved in Rhule's negotiations with Nebraska.

“Structuring a business arrangement that everybody was willing to sign off on was a bit of a challenge,” Alberts said, “and there were some fits and starts to it."

Alberts said there was a period when it looked like the deal would fall through, but the sides reached an agreement on Thanksgiving morning.

Rhule's starting salary is $5.5 million and rises by at least $1 million each year, topping out at $12.5 million if he's still coach in 2030. Asked if he thought he would need to spend an average of $9 million per year on a football coach, Alberts said the salary scale is rising in the Big Ten and Southeastern Conference because of dramatically increasing revenues tied to record-setting television rights deals.

“Let's be honest, there's a Power Two now,” Alberts said. “Certainly not to denigrate any of the other conferences, but that's kind of where we're heading. ... If we're going to be serious about having Nebraska football competing at the upper level of the Big Ten Conference, there's going to be resources needed to acquire that talent.”

Rhule, who was 11-27 in two-plus seasons with the Panthers, was hired because of the success he had in his two college head coaching jobs.

Rhule emphasized toughness in practices and games and said the only way to win games is to win the line of scrimmage. The Huskers have notably struggled on the offensive and defensive lines.

Rhule, who grew up in New York City as a Penn State fan, was a walk-on linebacker for the Nittany Lions. He said he attended the Huskers' 44-6 Kickoff Classic win over Penn State in 1983 and was heartbroken when Nebraska beat out the unbeaten Nittany Lions for the 1994 national title.

Rhule said he respected the physical brand of football the Huskers played back then and that he wants to bring it back.

About 750 boosters and former players turned out at the Hawks Championship Center for a welcome event and news conference. Among them were Gov.-elect Jim Pillen, a Republican who played defensive back for the Huskers in the 1970s, and 1972 Heisman Trophy winner Johnny Rodgers. The band played and fireworks went off next to the podium as Rhule and Alberts entered the building.

Rhule, 47, is the sixth coach to lead the program since College Football Hall of Famer Tom Osborne won or shared three national championships in four years before retiring after the 1997 season.

The Huskers' most recent conference championship came in 1999 under Osborne's successor, Frank Solich. Bill Callahan, Bo Pelini and Mike Riley followed before the program bottomed out under Scott Frost, who was 16-31 in four-plus seasons and never finished higher than fifth in the Big Ten West.

“There’s not a game that I expect to ever walk into where we don’t expect to win,” Rhule said. “It is not a burden but a responsibility on me as the coach to know that there will be people from all across the state who take the money that they’ve made with their hands and with their work and their daily toil — and they spend it to come watch our team play. You can’t win every game every year, but you can certainly be a team that people are proud to watch.”