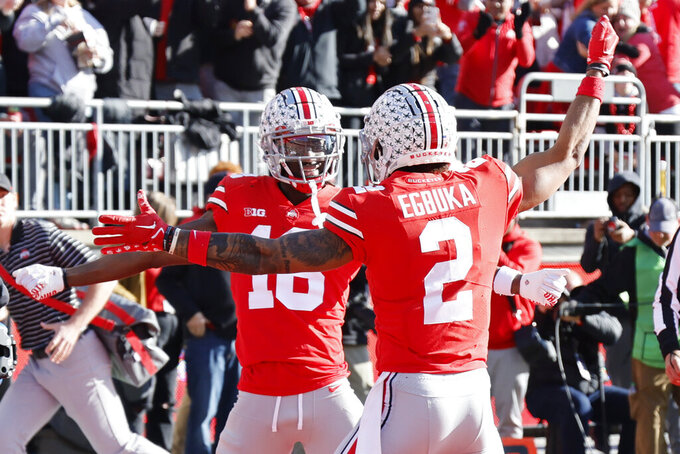 Ohio State was No. 5 on Tuesday night in the second-to-last College Football Playoff rankings, positioned to possibly take advantage if one of the top four slips up on championship weekend.

The Buckeyes (11-1) dropped three spots after losing 45-23 to the rival Wolverines on Saturday at home. That game was 24-20 heading into the fourth quarter and 31-23 with 7:23 to go before Michigan blew it open.

“It was talked about in the committee room that going into, really early in the fourth quarter, the game was still close,” said selection committee chairman Boo Corrigan, who is North Carolina State's athletic director. “That being said, you can’t completely dismiss the way the fourth quarter ended with Michigan kind of taking over the game there late.”

Alabama (10-2) moved up a spot to No. 6 and was followed by Southeastern Conference rival Tennessee, which beat the Crimson Tide in October.

The final rankings and the four-team field for the College Football Playoff will be set Sunday. The semifinals will be played Dec. 31 in the Peach Bowl in Atlanta and the Fiesta Bowl in Glendale, Arizona.

The top four play in their conference championships game this weekend. The undefeated teams might not need to win this weekend to lock up a spot.

Georgia plays LSU (9-3), which fell nine spots to 14th, in the SEC title game. Michigan plays Purdue (8-4) for the Big Ten championship. TCU faces Kansas State, which is 10th in the latest rankings and has already lost to the surprising Horned Frogs.

USC and Heisman Trophy frontrunner Caleb Williams face Utah, No. 11 in the rankings, on Friday night in Las Vegas for the Pac-12 championship.

If the Trojans slip up, that could give Ohio State a second chance.

Since the college football playoff started in 2014, only one team has moved from outside the top four to inside and was selected to play in the semifinals without playing on championship weekend.

The Tigers then lost to Georgia in the SEC championship, which vaulted the Bulldogs from fifth to third.

Wisconsin was unbeaten and No. 4 heading into Big Ten championship game but was beaten by Ohio State, which had already lost twice and was No. 8.

That left the committee with an opening at No. 4 and it elevated Alabama instead of Ohio State, which finished No. 6 as the Big Ten champion with an 11-2 record.

Most of these scenarios involve the top four winning out and/or remaining the same after this weekend's games.

Alabama being ahead of Tennessee would mean the Crimson Tide would go to the Sugar Bowl, which is contractually bound to get either the SEC champ or the highest-ranked SEC team available after the playoff has been filled.

That would put Tennessee in the Orange Bowl or the Cotton Bowl, depending on what the Rose Bowl does.

If Ohio State doesn't make it into the playoff, the Buckeyes could go to the Rose Bowl for the second straight season. But with Penn State moving up to No. 8 this week, that opens up the possibility the Rose Bowl could select Penn State, leaving Ohio State to go to the Orange Bowl as the highest-ranked available Big Ten or SEC team.

If Ohio State ends up in the Rose Bowl, Penn State is a good bet for the Cotton.

The Buckeyes in the Orange Bowl against the winner of the Atlantic Coast Conference title game between Clemson and North Carolina bumps Tennessee to the Cotton against the highest-ranked champion from a Group of Five conference.

The latest rankings pretty much guaranteed that will be the winner of the American Athletic Conference championship between Tulane, ranked 18th, and No. 22 UCF.

No other team from a non-Power Five conference is ranked.

Kansas State is locked into the Sugar Bowl no matter the result of its game against TCU as either the Big 12 champion or runner-up in place of the Big 12 champ making the playoff.

Washington at No. 12 behind Utah puts the Huskies in great shape to make the Rose Bowl as the Pac-12's representative if USC beats Utah and the Trojans make the playoff.

If Utah wins a second straight Pac-12 title, the Rose Bowl would again have some leeway to take another highly ranked team (Washington) instead of having a return trip to Pasadena, California, by the Utes.

By John Zenor 7 minutes ago
By Pete Iacobelli 2 hrs ago
2 hrs ago
By Ralph D. Russo 6 hrs ago
By Ken Powtak 19 hrs ago