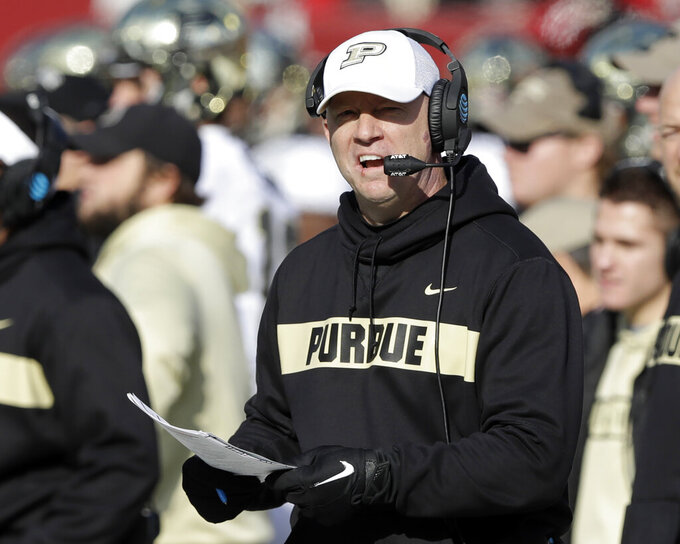 FILE - In this Nov. 24, 2018, file photo, Purdue head coach Jeff Brohm looks on during the second half of an NCAA college football game against Indiana in Bloomington, Ind. Brohm did not like how his defense performed last season so he shook it up. He fired defensive coordinator Bob Diaco after one season, hired three new assistants and got more involved in the defensive meetings. Now it is time to find out how much has changed. (AP Photo/Darron Cummings, File)

Purdue coach Jeff Brohm didn't like how his defense performed last season, so he shook it up.

He fired defensive coordinator Bob Diaco after one season, hired three new assistants and got more involved in the defensive meetings. Now it's time to find out how much has changed.

On Friday, the Boilermakers will begin installing their revamped defense when they hold the first of 15 scheduled spring practices.

“I felt like we weren't going in the direction I wanted to and I wanted to put a stop to that right away," Brohm said Thursday. “I want to see us go out there and compete. I want us to play aggressive, physical and get after the quarterback and I want a defense that has the identity I believe in."

The Boilermakers (2-4) have until March 19 to start building the momentum, and it's not just the defensive style that will look different.

Aidan O'Connell, last year's opening day starter at quarterback, has only been cleared for limited work after having season-ending foot surgery in December. That means Jack Plummer, the starter in 2019, will take the bulk of the snaps.

And the pairing of all-conference defensive end George Karlaftis with his younger brother, Yanni, the highly-touted outside linebacker from just a few miles down the road, has been put on hold because of a hamstring injury. Yanni Karlaftis suffered the injury in high school and Brohm said he aggravated it recently.

But their absences won't slow down what Brohm hopes to accomplish defensively.

He hired Brad Lambert, the former Charlotte head coach and defensive coordinator at Marshall, to work with Anthony Poindexter as co-defensive coordinators. Brohm brought back Mark Hagen, the former Purdue and Indiana assistant, who spent last season as the defensive line coach at Texas, and added former Florida safeties coach Ron English. Lambert will work with linebackers, English with the secondary and Hagen with the linemen.

All three have been college coordinators and all three have worked closely with Brohm to create a defense desperately in need of change after finishing last season with five sacks and seven takeaways. It also allowed at least 20 points in all six games and 27 or more in the final four — all losses.

Purdue also didn't play in bowl games either of the past two seasons, all of which has Brohm looking for a fix.

“I’ve been heavily involved (with the defense) since the season’s been over," Brohm said. “We are going to challenge things, we are going to gamble some. I want our guys to make plays, get turnovers, not be afraid to make mistakes and to dictate what happens on that side of the field."