Cedric Tillman had surgery to speed recovery for No. 8 Vols 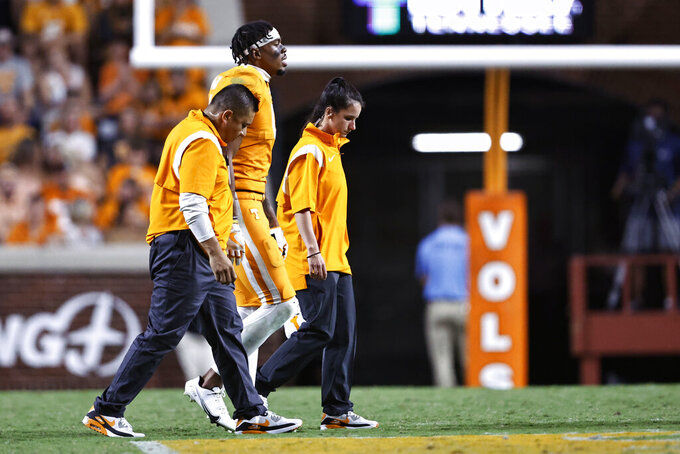 FILE - Tennessee wide receiver Cedric Tillman walks off the field after being injured during the first half of an NCAA college football game against Akron on Sept. 17, 2022, in Knoxville, Tenn. Tennessee coach Josh Heupel said Monday, Oct. 3, that Tillman had surgery on his left ankle to speed up recovery from an injury. (AP Photo/Wade Payne, File)

“We’ll see where he’s at,” Heupel said of Tillman. "He was limited, but moving around a little bit today. We’ll continue to see how it unfolds this week and see where we’re at.”

Heupel also said starting cornerback Warren Burrell will miss the rest of the season after having surgery for an upper-body injury. Burrell missed the last two games after starting 22 of 31 games played.

Tillman has been Hendon Hooker's favorite target, combining for at least one TD in eight games for 11 touchdowns. Their combined 10 TDs tied for fourth among quarterback-receiver combinations in school history for a single season, three off the record of 13 set by Peyton Manning to Marcus Nash in 1997.

The receiver's last touchdown gave Tennessee an overtime win over then-No. 17 Pittsburgh on Sept. 10. Tillman had 1,081 yards receiving last season to become the Vols' first receiver to reach at least 1,000 yards in a season since Justin Hunter in 2012.

Tennessee hosts top-ranked Alabama on Oct. 15. Heupel said Tillman will have to show he can function and play at the level both Tennessee and the receiver want.