Cyclone watch: Rising Iowa St done with 'ghosts of the past' 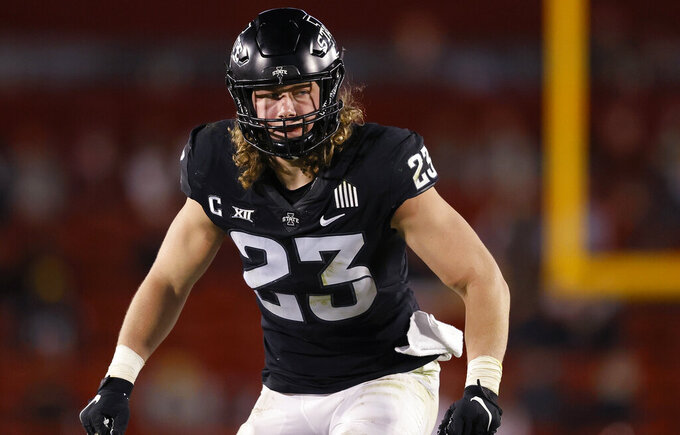 FILE - In this Nov. 7, 2020, file photo, Iowa State linebacker Mike Rose plays in the team's NCAA college football game against Baylor in Ames, Iowa. Rose was an afterthought for most major-college recruiters when he was coming out of high school, and now he might be the best linebacker in the Big 12. (AP Photo/Matthew Putney, File)

AMES, Iowa (AP) — The arc of Mike Rose's college football career is a microcosm of Iowa State under Matt Campbell.

Rose was an afterthought for most major-college recruiters when he was coming out of high school, and now he might be the best linebacker in the Big 12.

The Cyclones were an afterthought for top prospects before Campbell's arrival, and now they're making a run at becoming the best team in the Big 12 with designs on making the College Football Playoff.

“People never would have expected this,” Rose said Monday at the team's media day. "But being on the inside, it’s no surprise. We do it the right way, come to work every day and live the right way outside this facility. We might not be the biggest, strongest guys, but we’re going to play hard, and that’s really how we’ve done it.”

The Cyclones are coming off the best season in program history. They reached the Big 12 championship game for the first time, beat Oregon in the Fiesta Bowl and finished 9-3 and No. 9 in the final Associated Press Top 25.

Expectations for this season are just as high. The Cyclones are picked behind defending conference champion Oklahoma again with a roster that returns 10 starters on offense and nine on defense. They'll likely be a top-10 team when they open at home Sept. 4 against Northern Iowa.

Campbell, entering his sixth season, has orchestrated the dramatic turnaround at a place where former coach Jim Walden famously said coaches go to get fired.

Campbell said he couldn't have done it without the players he brought in his first and second years.

“Those guys really took a chance on us,” he said, his voice cracking. “They didn’t come to Iowa State when anybody was talking about success or going from good to great or anything like that. You were trying to fight the ghosts of the past.”

Tight ends Chase Allen and offensive lineman Sean Foster were among Campbell's first signees and are among eight super seniors who are taking advantage of the extra year of eligibility granted by the NCAA because of the pandemic.

“You’re selling hope. You were selling an opportunity,” Campbell said. “That’s where (you get) your emotion and appreciation for these guys who believed that this could happen and then, man, they went to work to make it happen. They really came in when there was no reality. There was just a hope and a vision and those guys made the vision a reality.”

Campbell went 3-9 in his first season in Ames, and then the program took off. Campbell was Big 12 coach of the year in 2017, ‘18 and ’20, and he has led the Cyclones to a school-record four straight bowls. Their 32 wins in four years also is a program best.

“Those older guys definitely paved the way for us to get where we are today, so I feel like we do owe them something,” said junior running back Breece Hall, who went over 100 yards a nation-best nine times last season.

Brock Purdy, entering his fourth year as starting quarterback, signed with Iowa State after the team made a five-win improvement in 2017 and won the Liberty Bowl. He was his state's high school player of the year coming out of Gilbert, Arizona, and had drawn interest from Alabama and Texas A&M, among others.

“The second wave of recruits, we came in fully believing in what Campbell has been preaching and now we’re in our prime with all the experience we have under our belts," Purdy said. "We’re able to go out and play and keep this culture alive moving forward.”

Rose, from Brecksville, Ohio, came to Ames the same year as Purdy but wasn't nearly as decorated. His best offer was from Ball State.

He's the poster boy for Iowa's State's system under Campbell. He came in a bit under the recruiting radar, was given an opportunity and was developed — albeit rapidly — by a coaching staff Campbell has mostly kept together. Now Rose is the reigning Big 12 defensive player of the year.

“Campbell has taught me a lot throughout my career," Rose said. "Every time he tells the team something, it’s impactful. He has a new mission each year, he sells it to his team, and people buy in. That’s the biggest thing.”