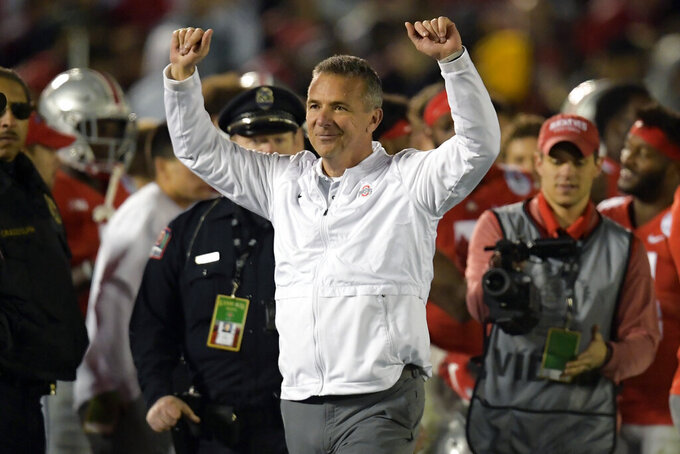 FILE - In this Tuesday, Jan. 1, 2019 file photo, Ohio State coach Urban Meyer celebrates at the end of the team's 28-23 win over Washington during the Rose Bowl NCAA college football game in Pasadena, Calif. Urban Meyer is headed back to television. Fox announced on Monday, March 11, 2019 that they have hired the former Ohio State coach as one of the analysts for its retooled college football pregame show. Fox also announced that it has hired Reggie Bush and will move Brady Quinn from the booth to the studio. (AP Photo/Mark J. Terrill, File)

LOS ANGELES (AP) — Urban Meyer did not rule out a return to television after announcing his retirement as Ohio State's coach. On Monday, that move officially happened.

Fox has announced that it has hired Meyer as one of the analysts for its retooled college football pregame show. Meyer will join Brady Quinn, Reggie Bush, Matt Leinart and Rob Stone on the one-hour show, which will start at 11 a.m. Eastern. Fox airs Big Ten, Pac-12 and Big 12 games.

Meyer, who won national championships at Florida and Ohio State, retired last season after eight years in charge of the Buckeyes. He worked for ESPN as an analyst in 2010 after leaving Florida and before going to Ohio State.

"I know I enjoyed my time when I was doing that, but we'll see down the road," Meyer said during the Rose Bowl when asked about a return to broadcasting. He is also an assistant athletic director at Ohio State and teaches a class in the university's business school.

Fox Sports President Mark Silverman said talks with Meyer began toward the end of last year and that there was a mutual interest in having him in the studio. Meyer did a combination of studio work and called games during his year at ESPN.

"We wanted to take a big swing and improve our studio show, especially once we knew we were getting an hour on Fox before the noon game," Silverman said. "Once we knew we had Urban, we thought about putting together the rest of the lineup."

Quinn has been a game analyst on Fox since 2014. Bush will be reunited with former USC teammate Leinart, who has been a part of Fox's studio team since 2013.

"We're taking a slice of recent college football history. We have the big-name coach and former players that adds a fresh look," Silverman said.