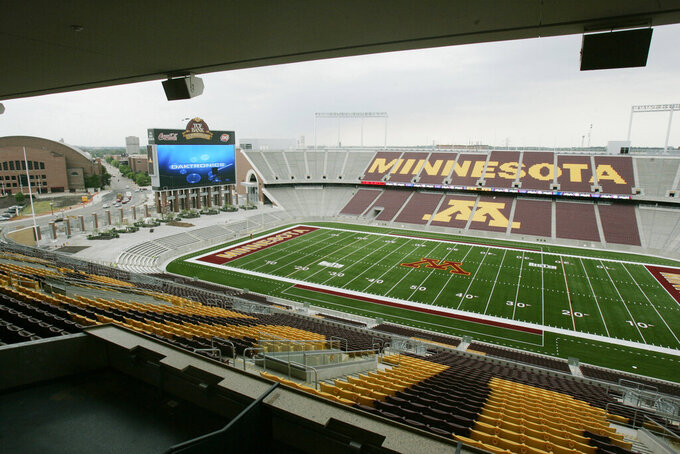 FILE - TCF Bank Stadium is shown during a media tour in Minneapolis, in this Tuesday, June 16, 2009, file photo. The home for Minnesota's football games has a new name: Huntington Bank Stadium. The university's board of regents approved the change at a meeting on Tuesday, June 29, 2021, by a 9-2 vote. (AP Photo/Jim Mone, File)

The university's board of regents approved the change at a meeting on Tuesday by a 9-2 vote. The 50,000-seat facility opened for the Gophers on campus in 2009 as TCF Bank Stadium. Huntington Bank's acquisition of the Minnesota-founded TCF Bank was finalized earlier this month.

The newly merged company will have headquarters in both Detroit and Columbus, Ohio. TCF bought the original naming rights four years before the stadium opened for $35 million, a contract that currently runs through the 2030 season.

The original agreement anticipated the potential of these types of corporate name changes. Under the terms of a 2017 amendment, which added the stadium logo to the playing surface and included an $8 million contribution to the university's new athletic department facility, Huntington can extend the deal for another 10 years through the 2040 season for an additional $17.6 million. Exercising that option would include an immediate $4 million payment to the university.

Regent Darrin Rosha cast one of the no votes. He introduced a resolution, which failed, to renegotiate the terms of the naming rights agreement, on the basis that the new branding and signage will take up more space to accommodate a longer corporate name.

“The university is not getting as good of a deal with this logo,” Rosha said during the meeting.

The only other Big Ten football stadium with a corporate name is at Rutgers, which plays at SHI Stadium in Piscataway, New Jersey.

Minnesota's season opener is at home against Ohio State on Sept. 2.