Iron Bowl still stands out, even without CFP implications 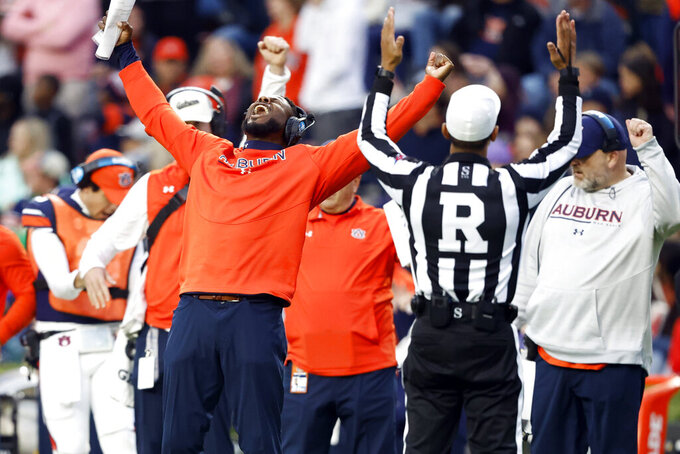 In a week filled with plenty of traditional rivals, the Iron Bowl stands out. There's no trip to the Southeastern Conference title game on the line, but there is plenty of drama for both teams. The Crimson Tide had only been outside the College Football Playoff once in its first six years until 2022. A loss in this one might drop Alabama outside the New Year's Six tier of bowls. Alabama’s two losses have come by a total of four points. Alabama is led by Heisman Troph-winning quarterback Bryce Young, who has passed for 2,664 yards with 24 touchdowns and six interceptions. Auburn has wins over Texas A&M and Western Kentucky the past two weeks. The Tigers and interim coach Carnell Williams hope to win against rival Alabama for just third time in the past nine games. Tigers tailback Jarquez Hunter has run for 100 or more yards in both victories. He also rushed for a TD and threw a 20-yard touchdown pass to Koy Moore.

The Egg Bowl on Thanksgiving night should be entertaining, just for the sideline shots of Mississippi State coach Mike Leach and Ole Miss' Lane Kiffin. The Bulldogs lead the SEC with 549 pass attempts. No one else in the league has hit 400 this season. Mississippi State quarterback Will Rogers is averaging 303 yards of offense per game to lead the SEC. Ole Miss relies on its run game and freshman Quinshon Judkins, who leads the league with 1,385 yards and 16 touchdowns. The series between the state rivals has been tightly contested with each school winning 15 of the past 30 meetings. The Rebels enter with a two-game series win streak.

Mississippi State junior Emmanuel Forbes leads the SEC with six interceptions, double the total of anyone else this season. Forbes has brought three of them back for touchdowns, extending his FBS record of six. He's got 14 picks for his career and is the active leader among FBS players. Forbes had interception return touchdowns against Texas A&M, Kentucky and East Tennessee State. Against the Aggies, Forbes also blocked a punt that was returned for a touchdown.

Florida has gone 434 games without being shut out, a streak that stretches back to 1988 and a 16-0 loss to Auburn. ... Arkansas defensive back Kris Abrams-Draine is tied for the SEC lead with 11 pass breakups. ... Georgia has scored on 59 of its 61 possessions inside the opponents' 20-yard line. That leads the country at 97%. ... Kentucky running back Chris Rodriguez tied the school mark with his 19th 100-yard rushing game last week. ... LSU quarterback Jayden Daniels moved past 3,000 yards of total offense last week, becoming the fourth player in school history to accomplish that in a season.

No. 9 Tennessee (9-2, 5-2) will have to keep its head on straight so its loss to South Carolina doesn't hurt them twice at Vanderbilt (5-6, 2-5). The Commodores have a two-game win streak and would love to add the Vols to their run of success. Tennessee will be without star QB Hendon Hooker, who tore the anterior cruciate ligament in his left knee at South Carolina and is finished for the year.